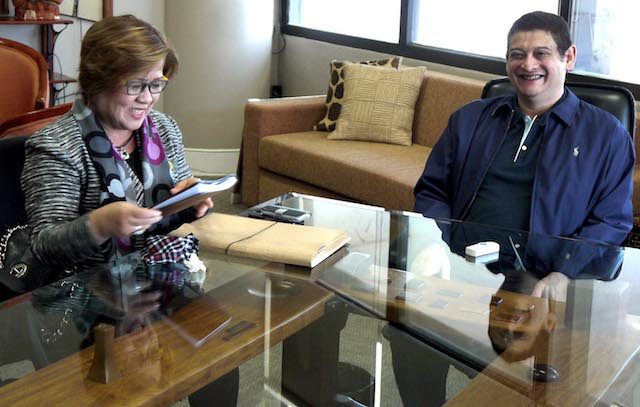 De Lima has yet to submit the accompanying affidavit of Napoles, and asked for a one-week extension or until May 22. The Senate granted this request.

The list bears close similarity to the one Rehabilitation Secretary Panfilo Lacson submitted to the Senate but with additional names handwritten. Lacson said Napoles’ husband Jaime and two children gave him a copy of the list in March.

(Editor’s Note: There are 12 lines of handwritten entries in the list. We initially re-typed some of the handwritten names but decided to remove them because some remain illegible. The ones retained are those typewritten.)

The following are the senators in the De Lima version of the list:

The list was typewritten but additional names were written by hand. These include one “Cong Angara-APO” but it was unclear if this referred to Senator Juan Edgardo “Sonny” Angara.

Guingona said that De Lima asked for a one-week extension of the deadline to submit the list and Napoles’ affidavit.The chairman agreed to grant the extension, but only for the affidavit of Napoles because De Lima said the alleged mastermind and her lawyers were still preparing this.

The senator insisted that the list be submitted to the Senate on Thursday, the deadline indicated in the subpoena the committee issued.

“I think it’s time we put an end to all speculation. This is the first list personally signed by Ms Janet Lim Napoles,” Guingona said.

Asked if this meant there will still be a second list or the list will be subject to change, Guingona said, “[De Lima] did not [say]. She did not say either way. I do not know. I cannot speculate. But for now, this is the list that has been signed by Janet Lim Napoles.”

Guingona said the only documents De Lima submitted on Thursday were the one-page list, and her letter asking for extension of the deadline.

The senator said the committee will wait for Napoles’ affidavit but will likely hold a hearing on the documents. Earlier Thursday, Guingona’s committee issued a subpoena for the digital records of principal whistleblower Benhur Luy on the scam.

De Lima refused to answer questions from the media after her meeting. Yet in a letter she gave Guingona, she said that she has in her possession an initial affidavit of Napoles that covers only the first batch of complaint over the pork barrel scam, and the Malampaya fund complaint her department filed before the Ombudsman last year.

“We are still awaiting [Napoles’] extended and much more comprehensive affidavit, which is expected to contain her narration of facts pertaining to all those named in the list,” De Lima wrote.

Guingona released the list despite De Lima’s request to wait for the completion of the justice department’s investigation.

“The ends of fair and thorough administration of Justice would be best served by awaiting the completion of a fullblown fact-finding investigation by the proper authorities before the disclosure of any list or unverified allegations,” De Lima said.

Napoles is accused of orchestrating an intricate corruption scheme involving the top levels of the executive and legislative branches of government. She faces plunder charges for allegedly conniving with officials to funnel pork barrel funds to her bogus non-governmental organizations, and splitting with them millions of pesos meant for development projects.

Months after testifying under oath at the Senate in November 2013 that she knew nothing about the scam, Napoles made a surprise turnaround. On April 22, she met with De Lima for 5 hours and gave a “tell-all” about the scandal.

Yet it turned out that her husband and two children also gave a copy of the list of officials she implicated to Lacson back in March. Whistleblower Sandra Cam claimed to also have a copy of the list. President Benigno Aquino III said he too saw different versions of the Napoles list. The existence of different lists sparked confusion and questions about Napoles’ credibility. (READ: How credible is Janet Napoles?)

Luy and several lawmakers said the Napoles list was meant to “muddle the issue,” referring to her involvement in the scam and the plunder charges to be filed against opposition Senators Ramon “Bong” Revilla Jr, Jinggoy Estrada and Juan Ponce Enrile.

Angara: Records will bear me out

Sought for comment on the De Lima version of the list, Abad said, “My position stays.” He was referring to his vehement denial of the Lacson version of the list. The budget secretary and former Batanes Representative had said that Napoles was “hallucinating.”

Senator Sonny Angara, who was dragged into the scam for the first time, issued a statement to deny the allegations.

“All my PDAF from 2004 to 2013 were allocated to [local government units], schools and hospitals within my congressional district in Aurora. For transparency, I have released all my PDAF records to the media. In my 3 terms as congressman, I have never allocated any of my PDAF to any NGO for that matter. Records will bear me out,” Angara said.

Angara released a detailed list of his PDAF records since he became Aurora representative in 2004 (see below).

Ejercito, who earlier denied the allegations along with other senators named, said he will deliver a privilege speech next week to address the charges.

“I plan to just put an end to this issue. I am collecting all evidence to end this because I’m really tired of defending myself for an issue I’m not involved with. It’s so tiring,” Ejercito told Rappler in a phone interview.

He said he is gathering evidence on the alleged P5 million mentioned in the Inquirer report about Luy’s records, where he supposedly gave the money to the Department of the Interior and Local Government (DILG).

“I will explain how it was spent or not spent,” Ejercito said.

Some of the other senators and lawmakers named in the De Lima copy of the Napoles list already responded to the same allegations in the Lacson version.

Senators Alan Peter Cayetano and Francis Escudero reiterated their calls for a Senate hearing to confront Napoles on the allegations, and answer the accusations.

Below is a photo of the list, as Guingona released to the media. Reynaldo Umali (with the word “Gov” written beside it)

Below is the list of Angara’s PDAF records, which he released after his name was included in the list: