What they don’t tell you about the OFW life

May 22, 2014 8:00 AM PHT
Shakira Sison
Facebook Twitter Copy URL
Copied
'It isn't whining to speak about OFW realities, nor does it mean that they are ungrateful for their overseas jobs; it's simply a peek into our not-so-ideal lives'

How many times have we heard this as someone’s ambition? The fact that the Philippines receives over $20 billion in annual OFW remittances does not lie. Many of our homes are built and children’s educations are funded by overseas money. To ambitious young people, it doesn’t even matter what kind of work they end up doing, so as long as they are paid in a different currency. Landing a job abroad has become the ultimate dream, and the OFW life is associated with flowery images of success and prosperity.

But there are a few things they don’t tell you about the OFW life; things that are often kept secret from those we leave behind.

Social media posts of gifts and balikbayan boxes, photos of travels and dining adventures – these make up less than a tenth of our real lives. Away from camera phones and the tags of our Facebook friends, it is far from being all glitter.

Nobody ever takes pictures of hard and menial work, long hours, or getting scolded by an employer. Nobody talks about the constant immigration struggle, or the fear involved in the life of an undocumented immigrant.

Nobody puts in a status update that they came as a nurse or a scientist but actually work as nannies. Nobody brags about being a tenured professor in the Philippines who works as a factory worker abroad.

We do what we can and we keep the drama away from home, even if our lives aren’t exactly what we imagined. At least our families can imagine otherwise.

Especially in countries where a worker doesn’t speak the language, our interactions where we can really be ourselves are limited to meetings with fellow Filipinos, most of whom are also busy with their own lives.

Moving to a new place always comes with displacement. And believe me, that good English that you boast about is no match to a particular region’s version of English, especially when spoken fast. No matter how Americanized or how independent you feel you are, you’ll always feel like you’ve been dropped overboard in cold water without a life jacket. It takes a while before you adjust and tread water on your own.

There will be a point where you’ll want at least one person to know you well; you’ll want someone of the same blood to be around you just to feel some kind of permanent bond. You’ll want someone to recognize you on the street or look for you if you haven’t passed by in a while. You’ll wish someone would visit you just because they were in the neighborhood.

But nobody really does that, nor has the time. One has to make time to bump into someone they know, or simply get used to being invisible.

Whenever there’s a financial need at home, the first person in mind is always the one who is abroad, believing that money is easy for OFWs to come by.

As an overseas worker, everyone seems to think you won the lotto simply because you work abroad. People ask for special favors or to fund their children’s baptisms and birthday parties, or for loans for a new business, just because it’s almost a given that you might have extra cash on hand. 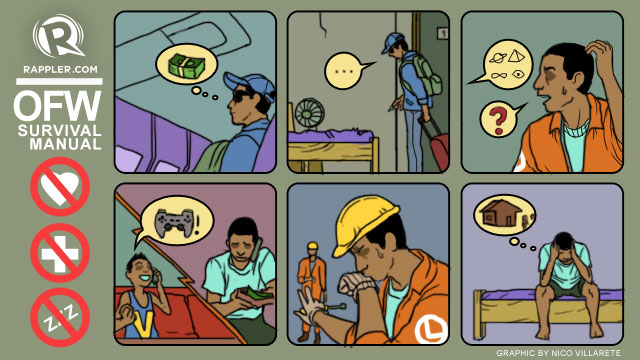 Many OFWs ignore their ringing phones because they know that most of the time it’s just someone asking for money. They wonder sometimes if money is all they’re good for, especially when they’re pressured to keep working abroad even if they’ve expressed their unhappiness in being away and their desire to come home.

4) Money is not endless

We forget that those who work in a place where a decent salary can be earned also have a higher cost of living and their own financial commitments. Many Pinoys go into debt because of these responsibilities and the ready availability of credit cards which easily trap the inexperienced consumer.

But rarely will an OFW admit that money is in short supply. They will borrow just to send money home, if need be. They will max out their credit cards to get their children the fanciest toys and clothes. Their reasoning is that if their loved ones can’t enjoy the rewards of their efforts, why else would they make sacrifices in their lives?

Even if their children grow up seeing them just as a source of gifts and cash, OFWs will take that over nothing, and over coming home and not being able to provide.

5) You’re always one step away from ruin

Especially when a worker doesn’t have health insurance or government protection, each one of us is one serious illness or accident away from losing our livelihood, or becoming disabled without any nearby family support to care for us.

When we are sick, unless we have close friends or loved ones around, we usually have to just shake it off or ride out a cold or the flu. If we don’t have sick days at work, we might actually work through our illnesses rather than lose the money we were going to earn that day.

There is always that fear of being one step away from disaster, and we take on those who rely on us and our income. We carry on anyway with crossed fingers and prayers because there are those who depend on us back home.

Every OFW comes to a point where he or she just wants to drop everything and go back home. Sometimes the sacrifices, the loneliness and the challenges are simply too much to make up for being away.

But most OFWs have made enormous sacrifices to be where they are, and have amassed enormous debts just to be able to go abroad. It isn’t uncommon for an OFW who has gone home to be pressured to go back abroad because of the unparalleled financial rewards. Many are stuck in cycles of debt and can hardly get by with their daily struggles, let alone think of a long-term financial plan.

Each OFW is thought of by their families as a savior – and it’s very difficult to give it all up and let everyone down just because they are tired.

Every Filipino who has been displaced and is stuck in a cycle of work and sleep longs for a return to simplicity and the lack of huge financial expectations.

For those who left children behind, no amount of money can replace that lost time, but they do what they can and what needs to be done for everyone else to survive.

It’s hard to admit that it isn’t always better on the other side. But the more we realize what is at stake when our friends and loved ones leave the Philippines for “a better life,” it’s important to see whose life is actually better, and what its cost is to relationships and families, as well as on one’s long-term financial stability if they’re not careful with their money.

It isn’t whining to speak about OFW realities, nor does it mean that they are ungrateful for their overseas jobs. It’s simply a peek into our not-so-ideal lives.

Maybe when OFWs speak up about their experiences, more Filipinos won’t think of it as the ultimate goal. Maybe that could help fix the broken system back home rather than be satisfied with constantly sending our labor to other shores.

Are you an OFW? What realities have you had to face being away from home? Is a family member of yours working abroad? What is it like being left behind? Let’s talk #BalikBayan talk. – Rappler.com

Shakira Andrea Sison is a Palanca Award-winning essayist. She currently works in finance and spends her non-working hours looking for OFWs in subway trains. She is a veterinarian by education and was managing a retail corporation in Manila before relocating to New York in 2002. Her column appears on Thursdays. Follow her on Twitter: @shakirasison and on Facebook.com/sisonshakira.

Visit #BalikBayan for more stories about Filipinos around the world