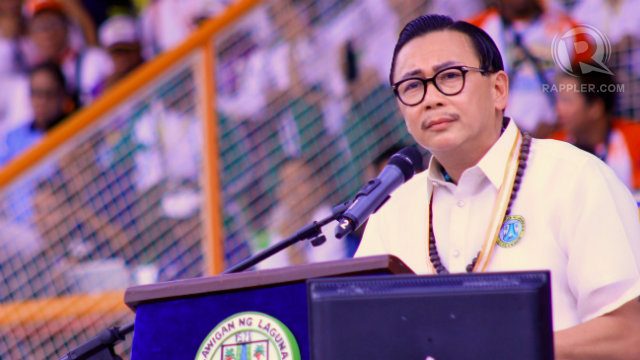 Comelec Chairman Sixto Brillantes Jr said in a media interview that the Comelec en banc promulgated and affirmed its First Division’s earlier decision to disqualify Ejercito after he was found to have overspent for his gubernatorial campaign in 2013.

Brillantes said that Ejercito has one legal remedy left, which is to elevate his case to the Supreme Court to seek a temporary restraining order (TRO) on the decision.

He said that the order would be “executory within 5 days if no TRO from the SC” is issued, which would pave the way for Laguna Vice Governor Ramil Hernandez to assume the gubernatorial seat.

In September 2013, the Comelec’s First Division resolved to disqualify Ejercito after he was found to have spent P6 million in a television advertisement alone when he ran for a second term in the 2013 – more than the P4.5-million limit set by law.

Since Laguna had 1,525,522 registered voters for the May 2013 elections, Ejercito was only allowed to spend P4.5 million for his campaign.

Ejercito: Prepared for a legal fight

Ejercito said in statement that he will take the case to the Supreme Court and expressed confidence that the Court will rule in his favor.

“I will bring this matter to the Supreme Court and  I am confident that the SC will uphold the rule of law and the voice of 550,000 voters of the Province of Laguna who voted for me,” he said.

Ejercito said the people of Laguna had voted him into office for two consecutive terms and assured his supporters that he will fight the disqualification case.