More time in hospital for Napoles? 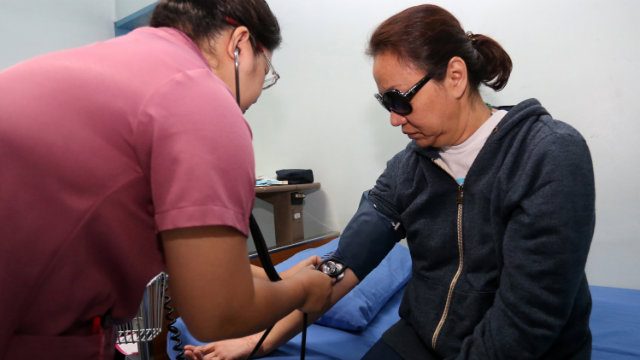 Napoles has been confined in OsMak for over 2 months now, after Alameda allowed her transfer to the hospital to remove a mass in her uterus. The controversial figure faces serious illegal detention charges filed by former aide turned scam whistleblower Benhur Luy.

On Tuesday, May 20, the court ordered her return to her detention center in Laguna after doctors said there were no medical or legal issues barring her discharge.

Based on the court order, the police have until Friday, May 23, to move her back to Laguna.

But events on Wednesday, May 21, may keep her in OsMak for longer.

In an interview with Rappler, Napoles’ lead counsel Stephen David said the bleeding had happened before but Napoles dismissed it because “akala niya normal.” (She thought it was normal.)

Napoles’ lawyers asked for an extension “until such time that the cause of [Napoles’] bleeding is determined and given proper medical attention and only after physicians recommend her anew for discharge.” During previous court hearings, OsMak medical director Dr. Perry Peralta said Napoles was earlier discharged on May 5, a week after her surgery.

Her bleeding prompted OsMak doctors to withdraw the discharge order.

Napoles’ continued hospital arrest has been criticized by some sectors. It was in OsMak where the alleged pork barrel scam mastermind met with Justice Secretary Leila de Lima to execute her supposed tell-all affidavit, which reportedly implicates other lawmakers including allies of the administration.

De Lima promised to submit the affidavit to the Senate blue ribbon committee this week.

In the last hearing at the Makati court, Napoles’ lawyers told Alameda that their request for an extension goes beyond Napoles’ medical concerns. David said Napoles needed to stay in the hospital so she could complete her affidavit on the pork barrel scam.

Her lawyers said they would file a motion asking for an extension based on the drafting of the affidavit. Alameda, however, said Napoles’ involvement in the pork barrel scam was not a concern of his court.

David said they were already done drafting Napoles’ affidavit, and added it would be printed out by Wednesday evening or Thursday morning.

(She overexerted herself because of the sheer volume of documents.)

Alameda will hear the new motion on Friday, May 23 – the original deadline for Napoles’ move back to Laguna.

PNP in a bind

The new motion requesting for an extension of her hospital stay puts the Philippine National Police (PNP) in a legal bind: can they or can’t they move Napoles? In a phone interview, PNP spokesman Senior Superintendent Wilben Mayor said they will continue to follow the court’s earlier order unless told otherwise.

The PNP will be unable to move Napoles back to Laguna without the clearance of her doctors and the doctor of OsMak. – Rappler.com