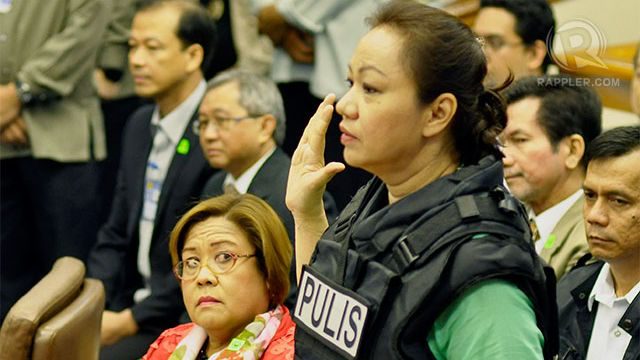 Deputy Presidential Spokesperson Abigail Valte said any request for concessions from Napoles in exchange for her knowledge of the controversy can only be considered after she submits a sworn statement.

“Let us first wait for her affidavit. She should finish her affidavit so we can see. In American colloquial language, ‘You put your money where your mouth is,’” Valte said over state-run radio DZRB on Saturday, May 24.

Valte added that any grant of immunity for Napoles or her children is a decision that the Ombudsman and the courts will make.

The Palace spokesperson was responding to a Philippine Star report quoting Justice Secretary Leila de Lima as saying that Napoles is willing to settle for “something less than immunity from prosecution” for as long as her children are “spared.”

De Lima said that while Napoles applied to become state witness, the alleged mastermind is not imposing it as a condition for testifying on the scam. “But she’s a mother and she has one request: don’t touch her children.”

The report said it was unclear what “sparing the children” means. De Lima though said that Napoles’ children might only be indicted for graft, instead of plunder, a non-bailable offense. Napoles’ lawyer Stephen David said in a text message that Napoles put in that request “dahil di naman kasama yung mga anak sa mga transakyon (because the children were not part of the transactions).”

Napoles faces plunder charges for allegedly conniving with top legislative and executive officials, including Senators Ramon “Bong” Revilla Jr, Jinggoy Estrada, and Juan Ponce Enrile to funnnel pork barrel funds to her bogus non-governmental organizations. She split millions of pesos in kickbacks with them in return.

Her two children, Jo Christine Napoles and James Christoper Napoles, are her co-accused. They are charged with violating the Anti-Graft and Corrupt Practices Act.

Napoles’ counsel Bruce Rivera told Rappler on Sunday, May 25, that it was merely a “conversation between two mothers” and that “no promises were made.”

(Napoles told De Lima to spare her children. It was just conversation where she asked that her kids not be included in the scam.)

Napoles’ youngest daughter, Jeane, faces a separate tax evasion case for reportedly failing to pay taxes worth P32 million on the basis of owning a condominium unit at the posh Ritz Carlton in Los Angeles, and a farm lot in Bayambang, Pangasinan. The Napoles couple said they, in practice, owned the properties, and are willing to take full responsibility. (READ: Napoles couple on tax evasion: Blame us, not Jeane)

Nine months since the scam broke out, Napoles did a sudden turnaround and offered to “tell all.” She told the Senate in November 2013 that she knew nothing about the controversy but is now offering to turn state witness.

Napoles was supposed to submit her affidavit to the Senate on Thursday, but her lawyer said she fell ill and asked for an extension until Monday, May 26.

Valte also commented on a GMA News report citing the affidavit of whistleblower Merlina Suñas as saying that Budget Secretary Florencio Abad was one of the congressmen who transacted with Napoles between 1997 and 1999.

“The claims against Secretary Abad are rather confusing but as Secretary Abad said, he is ready to face statements like this, and these accusations should not just be people’s say-so but should really be supported by evidence,” Valte said.

A former Batanes Representative and close ally of President Benigno Aquino III, Abad was dragged into the scam after his name appeared on the signed list of lawmakers Napoles implicated in the controversy.

“The nerve to be calling me a mentor. I mean, [being] a mentor is a relationship. If you compare our lifestyle from early on to this day, you can very well see that I will be very poor compared to her,” Abad said in a previous interview.

Valte added that the Palace is one with the Catholic Bishops’ Conference of the Philippines (CBCP) in calling for an impartial investigation into the scandal, and asking those in office “not to use their power to obstruct the pursuit of truth.”

“Let’s allow the process to unfold and go where the evidence will take us,” Valte said. “Our laws have put down a process that we all follow…. We in government strictly follow the process as prosecutors and investigators. At least in this particular case, it goes to the Office of the Ombudsman, which is an independent constitutional creation and the Sandiganbayan.”

Early on Saturday, the CBCP issued a major statement on the scam with several appeals, including for those guilty to “come out and admit their wrongdoings.”

The bishops released the statement after the circulation of different so-called Napoles lists, which the President and observers said were meant to muddle the issue. (READ: FACT CHECK: Making sense of the Napoles lists) – Rappler.com