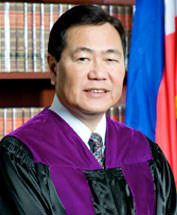 MANILA, Philippines – With Chief Justice Renato Corona’s conviction on Tuesday, May 29, his position is now rendered vacant, unless he goes to the Supreme Court and challenge the validity of the impeachment court’s decision.

The next senior justice, in this case Associate Justice Antonio Carpio, 62, will serve as acting chief justice. Whenever Corona was abroad in the past, Carpio was assigned to preside over en banc sessions but was never named acting chief.

Republic Act No. 296 or the Judiciary Act of  1948 states that, “In case of a vacancy in the office of Chief Justice of the Supreme Court or of his inability to perform the duties and powers of his office, they shall devolve upon the Associate Justice who is first in precedence, until such disability is removed, or another Chief Justice is appointed and duly qualified. This provision shall apply to every Associate Justice who succeeds to the office of Chief Justice.”

The Internal Rules of the Court state in the following provisions that in cases when there is no chief justice, the most senior justice will take over:

SEC. 6. Special raffle of cases. – Should an initiatory pleading pray for the issuance of a temporary restraining order or an urgent and extraordinary writ such as the writ of habeas corpus or of amparo, and the case cannot be included in the regular raffle, the Clerk of Court shall immediately call the attention of the Chief Justice or, in the latter’s absence, the most senior Member of the Court present.

Early Tuesday, Senate Majority Floor Leader also said the penalty on Corona – removal from office – was “immediately executory.” However, Senate President Juan Ponce Enrile, presiding officer of the impeachment court, failed to mention the penalty when he read the 20-3 verdict.

The Constitution states that “judgment in cases of impeachment shall not extend further than removal from office and disqualification to hold any office under the Republic of the Philippines.”

The notice of Corona’s termination is expected to be delivered Wednedsay morning to  his counsels, the Supreme Court, the House of Representatives, the Judicial and Bar Council (JBC), and Malacañang, as a matter of formality.

Before the JBC can begin the process of accepting nominees and vetting them for the President, the High Court must first make a formal declaration of a vacancy in the office of the chief justice, according to lawyer Ma. Milagros Fernan-Cayosa, a member of the JBC.

From the JBC’s short list of nominees, President Benigno Aquino III must name Corona’s replacement within 90 days after May 29.

Among the members of the JBC are Sen Francis Escudero and lead prosecutor Rep Niel Tupas.

Legal experts we interviewed said that Corona – who was convicted for betrayal of public trust and culpable violation of the Constitution – could ask the High Court to rule on the constitutionality of the decision of the impeachment court.

Dean Antonio La Viña of the Ateneo School of Government said Corona may file a petition with the High Tribunal to argue that the impeachment court committed grave abuse of discretion against him.

In February, Corona asked the SC to nullify the impeachment complaint. La Viña said this case could be consolidated with Corona’s new petition, if ever he files one.

Corona himself said in his statement that he has accepted the verdict. The ousted chief justice met with his counsels Tuesday night at the Medical City, where he is still confined.

Retired Court of Appeals Justice Hector Hofileña – who withdrew from Corona’s legal team before the trial started in January – said that the SC cannot intervene in this matter. “Senate is the sole judge,” he said.

House majority leader Neptali ‘Boyet’ Gonzalez said on May 22 that even if Corona goes to the SC, he will not be able to get enough votes to overturn the conviction. “Hindi ko lang alam kung may matatapang na matitirang mga justices na kakampi pa sa kaniya. Yun lang. Yun na lang ang hintayin natin. Kung may mga matatapang pa na, kasi ang kakailanganin niya at the very least is a restraining order para mapatigil yung judgment. Dun pa lang, ako’y nangangamba na baka at that time wala ng kakampi si chief justice na mga kasama niya dun,” he said. (I don’t think the justices still have the guts to side with him. He needs to get a temporary restraining order at the very least. I don’t think he has enough allies at the SC to even get a TRO.)

One of the JBC members who asked not to be named said they still cannot say when they can convene as a body because Corona may go to the High Court. “Hard to know, especally if he appeals to SC,” he said.

Cayosa, a JBC member, said that traditionally, the next most senior justice can preside over the JBC. That would be Carpio. But if Carpio is nominated for the post, Cayosa said he has to inhibit from voting. Other SC justices who will be nominated will have to do the same, she added. (The top 5 most senior SC members are automatically considered for the post).

Cayosa said retired SC Justice Regino Hermosisima may also preside over the JBC. She said there is no urgency to get an additional member because the JBC rules require only 5 votes for an applicant to be included in the shortlist.

How the chief is selected

After the High Court makes a formal declaration of vacancy of the position of chief justice, the JBC will open the application process and publish invitation for applications and nominations will be in national broadsheets.

A chief justice should have the following qualifications:

The JBC internal rules used to require a five-year period of service for non-career applicants to the High Court. The body relaxed this rule in 2009, however.

The JBC will conduct public interviews and internal surveys among SC employees to gauge the integrity, independence and competence of aspirants to the post.

They will then vote and come up with a short list of at least 3 nominees.

In 2010, Escudero, Lagman and Hermosisima voted for Corona’s inclusion in the JBC short list for chief justice.

President Aquino will choose the next chief justice from the list within 90 days after May 29, when Corona was removed by the impeachment court. This means his deadline would be around end of August 2012. – Rappler.com