May 28, 2014 5:12 PM PHT
Ayee Macaraig
Facebook Twitter Copy URL
Copied
Senators express their frustration over slow and expensive Internet connection in the Philippines, proposing to regulate this to set standards 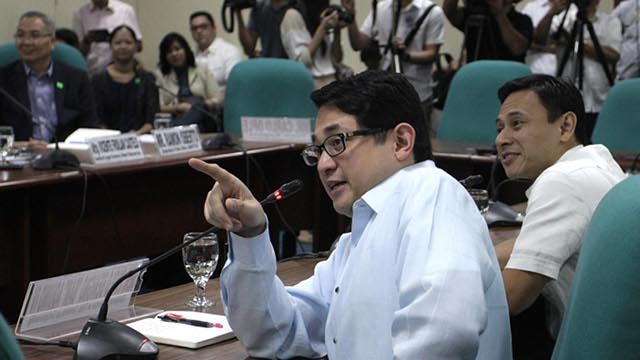 Senator Loren Legarda used a Senate hearing to vent out her frustration over the slow and expensive Internet connection in her home and office, an experience common to many netizens in a country known as the social media capital of the world.

In a hearing of the Senate trade committee on Wednesday, May 28, Legarda pressed officials of telecommunication companies Globe and Smart to explain why she has to pay for a service that is expensive but unreliable. She said she spoke not just as a legislator but a consumer.

“As we speak, there is no Internet in my office,” Legarda said. “Internet is either absent or excruciatingly slow which is so exasperating, frustrating. I don’t like high-tech answers, please. I am not high-tech. Gusto ko maintindihan. Ang mahal ng singil, bakit ganoon? (I want to understand. You charge so much, why is that?)

Officials responded that the top reason for poor Internet connection in the Philippines was congestion.

“You can have a network with more than adequate capacity but you can have congestion in a specific area. The common example is a concert. Tens of thousands are in one area. All have cellphones; many taking selfies. It’s hard to design a network that can handle that capacity,” said Ramon Isberto, head of the public affairs group of Smart Communications.

Isberto said that to solve the problem, telcos have to invest in their networks by building more cell sites or adding equipment to existing ones “but it will entail capital expenditure.”

The National Telecommunications Commission (NTC), which regulates telcos, proposed making Internet a “basic service” instead of a “value added service.”

“This means speed and price are dictated by the market. Maybe we want to make it a basic service to regulate speed and price,” said NTC Commissioner Gamaliel Cordoba.

Senate trade committee chairman Senator Paolo Benigno “Bam” Aquino IV agreed with the NTC’s proposal. He said Internet should be made a basic service by amending the Public Service Act of 1936.

“Internet is not a basic service [now], meaning the NTC cannot fully regulate it and I think it can be. It is already recognized as a human right,” said Aquino, citing the report of United Nations Special Rapporteur on Freedom of Expression and Opinion Frank La Rue.

“Imagine, we’re talking about the high-tech information age and we’re still using a 1936 law so it’s about time we update this law and use amendments to push for better access and more affordable Internet in the Philippines,” added Aquino, who called for the hearing.

“The transition to a faster internet speed would be two years after the enactment of the law,” Recto said. Legarda later repeated this point. “May I just know why the Philippines is charging P1,000 monthly for 1 to 2 Mbps compared to Singapore, which is charging P1,300 for 15 Mbps, and Thailand which has 12 Mbps but charges P1,100?”

Vicente Froilan Castelo, general legal counsel of Globe Telecom Inc, responded. “We cannot compare Singapore and Thailand to the Philippines. Singapore is a small state. The Philippines has 7,100 islands so it’s an expensive network to put up. It’s a far more complex network.”

The NTC also said that Singapore has government subsidy, with its telcos “having a government component.”

Instead of regulating Internet speed, Globe’s Castelo argued that the problem was actually “too much legislation,” especially among local government units (LGUs).

The NTC admitted as much. “The LGUs have different regulations, fees collected and permits processed. Telcos have a hard time getting permits [to build cell sites] and it’s different per area so maybe it can be made uniform,” said Cordoba.

Globe’s Castelo added that telcos also have problems with exclusive subdivisions, which refuse to allow them to build cell sites inside villages. “There’s a lack of access for us to provide capacity. We’re not allowed to go in.”

Smart’s Isberto commented on proposals to regulate Internet speed. “Let me put it as politely as I can. The private sector is doing its job to get standards higher. The question of higher speed is developing a viable business model.”

Yet NTC’s Cordoba said a more fundamental problem must be addressed: the lack of competition in a telecomm industry where there are only two major players.

Cordoba said Congress should pass an anti-trust law. “In other countries, companies are not allowed to dominate the market. What happens [here] is that there is consolidation because of the cost of investments.”

By the 60-40 rule, the NTC official was referring to a provision in the 1987 Constitution limiting foreign ownership of companies in the Philippines to 40%. ‘Truth in advertising on Internet speed’

Aquino said another recommendation of his committee is to prohibit telcos from using the “up to” or optimal Internet speed in advertising, and instead use the average Internet speed so as not to deceive consumers.

The NTC said it is already doing this by disapproving ads that do not state the minimum Internet speed.

Aquino said his committee will form a technical working group to flesh out the proposals, and call another hearing in the next two to 3 months.

Legarda though had a simple suggestion. “May we request the service providers to review your service fees, monthly fees you’re charging millions of Filipino consumers because all of us agree there is low connectivity and poor service. You’re saying there are many reasons then perhaps the rate should be adjusted until the time the rate is [on a] par with other nations.”

“Fair is fair. The rates should be adjusted lower. Mali ba ako?” (Am I wrong?) – Rappler.com