At the same time, a Makati court also dismissed her plea to extend her stay in the hospital.

In a progress report submitted to Judge Elmo Alameda of the Makati Regional Trial Court Branch 150, Dr Florentina A. Villanueva, an ob-gyn from OsMak, said that although Napoles was still bleeding evening of Wednesday, May 28, it “was now minimal and acceptable.”

Villanueva entered the discharge order on Napoles’ chart at 6 pm Wednesday. “The Internal Medicine Service was informed of the patient’s discharge order. They subsequently [said] the patient is cleared for discharge,” the report said.

Alameda used this report as basis for dismissing the motion of the Napoles camp to recall his earlier order to return Napoles to her detention center in Fort Sto Domingo, Laguna.

According to the clerk of court Diosfa Valencia, the order is “immediately executory.”

The medical progress report was submitted to comply with Alameda’s earlier order. Alameda is set to decide before the day ends on Napoles’ motion to extend her hospital stay.

Earlier, Villanueva told the court that Napoles would be ready for discharge by May 29, provided she stopped bleeding.

Villanueva, who prepared the report, noted that Napoles refused to show doctors proof of her bleeding on several occasions. On May 26, Monday, her lawyers told the court that Napoles was still bleeding.

“To pacify her, [Dr Villanueva] just asked [Napoles] to describe the bleeding on the pad,” the report noted.

By Tuesday, May 27, she was in better spirits, and said she was no longer bleeding.

Her mood dipped the night OsMak doctors cleared her for discharge. Napoles was “lying in bed, reading an article in the newspaper, in a sad mood, crying,” the report noted.

“[Napoles] said that nobody wanted to believe her; that everyone was making fun of her and making her life a circus.”

She said bleeding was minimal “but refused to show her pad.” Villanueva ordered Napoles be given a sponge bath. “She then closed her eyes and apparently, she fell asleep,” the report noted.

‘Guard at all times’

Earlier, OsMak doctors noted that spotting was normal and was a sign of recovery. “[The doctors] are confident that bleeding will not recur if the patient complies with the prescribed treatment including complete bed rest and a stress-free environment,” Villanueva wrote in the report. 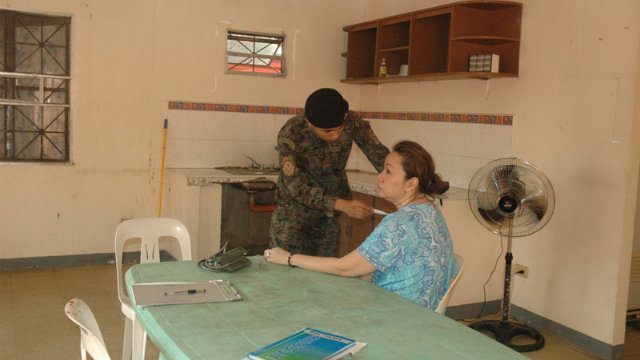 Following Alameda’s order, Napoles will once again call the tiny detention center in Fort Sto Doming her home. Villanueva said Napoles “must have a guard at all times, preferably a nurse” to monitor her medical condition.

“It is also necessary that the patient must be stress-free and she must not lift anything heavier than 5 kilos. She must be kept in bed most of the time with toilet privileges for at least one month,” said Villanueva.

Napoles should also have a physician nearby and a means to take her to the nearest medical facility with an ob-gyn specialist.

Napoles was moved to OsMak from her detention center in Laguna to undergo surgery to remove a mass in her uterus.

Napoles underwent a complete hysterectomy on April 23 and was discharged early May 5. But she filed a motion to extend her hospital stay, a move which was denied by Alameda.

She was supposed to be moved by May 23 but her doctors reported “excessive vaginal bleeding,” prompting them to revoke their earlier discharge order.