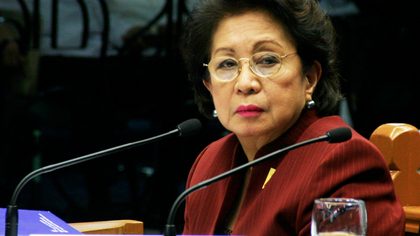 (UPDATED) MANILA, Philippines – Ombudsman Conchita Carpio-Morales called Chief Justice Renato Corona a “certified liar” Friday, May 25, after he dared Morales to resign for supposedly allowing Malacañang to use her.

Upon questioning by Sen Jinggoy Estrada on Day 42 of his own impeachment trial, Corona branded as a lie Morales’ testimony that he had US$12-M dollar accounts.

He told the impeachment court he only had S2.4-M. On the other hand, he said he has P80-M in peso deposits.

As such, Corona said he believes Morales allowed herself to be used by Malacañang, which he earlier said used all state resources to remove him from office.

Asked what could have motivated her to do this, Corona recalled rejecting a request by Morales for her to increase her budget as a retiring justice. Corona and Morales are former colleagues in the Supreme Court; Morales retired in 2010.

In a reaction through a phone interview aired on television, Morales denied Corona’s accusation that she is allowing the Palace to use her. “Never, never ever!” an irate Morales told GMA News. “Siya ang nagpapagamit!” (It is he who allows himself to be used!)

“I’m fuming mad! He is a certified liar!” Morales added.

On her supposed lobby for a bigger retirement fee, Morales said that on the contrary, Corona “reduced it in half.” But, she added, “I suffered in silence.” (Watch more in the clip below.)

On May 14, Morales told the impeachment court that she obtained details of Corona’s dollar accounts from the Anti-Money Laundering Council (AMLC), which provided her data as she was investigating a forfeiture complaint filed against her by members of civil society organizations.

“I did not get it from the gutter,” she said. – Rappler.com