Jun 9, 2014 4:48 PM PHT
Ayee Macaraig
Facebook Twitter Copy URL
Copied
The senator uses his much-awaited privilege speech to say he will answer pork barrel plunder charges in court. He instead thanks God, his family, political mentors and colleagues, and unveils a music video MANILA, Philippines (UPDATED) – A list? Senator Ramon “Bong” Revilla Jr pulled out his own list all right, but it was not a list of officials who dipped their fingers into the pork barrel cookie jar.

Instead, the senator charged with plunder over the country’s biggest corruption scandal unveiled his “thank you” list to honor family, friends and supporters in a privilege speech featuring a tribute-cum-farewell to his colleagues, with a music video to top it all off. (READ the full speech here: Bong Revilla’s speech that made everyone…) Watch the full speech here:

Contrary to speculation, Revilla did not take down President Benigno Aquino III and his allies, or resign as senator in his speech on Monday, June 9.

Instead, the action star-turned-politician poured out his gratitude to supporters and friends via song.

“Salamat mga kaibigan, kailanman ‘di malilimutan. Kung ito man ang kapalaran, nananalig pa rin sa katotohanan,” Revilla belted out in a music video. (Thank you friends. I will never forget you. If this is my fate, I still believe in the truth.)

Watch the music video below.

The senator famously known for his role in the film Ang Panday introduced the presentation where he appeared in both video and song. “May hiling lang ako sa inyo: may orihinal na awit sana maibigan ninyo.” (I have a request: I have an original song. I hope you like it.)

Days after he was charged with plunder before the Sandiganbayan on June 6, the senator who allegedly earned the most kickbacks from the pork barrel scam sought to appeal to his mass fan base instead of addressing his political rivals.

“Makulong man ako, ‘di nila makukulong ang pangarap at pagmamahal ko sa bayan.” (Even if I am jailed, they cannot jail my dream and love for the nation.)

Contrary to his first privilege speech in January, Revilla did not use a combative tone against Aquino but instead opted for a more conciliatory approach.

(Let us stop fighting. Let us stop attacking. The different colors of our flag signify unity. It is my goal that there be no yellow, orange, blue, green or red. There is only one blood running through our veins: the Filipino blood. One blood, one spirit.)

At the onset of his speech, Revilla signified that he will only address the charges that he plundered taxpayers’ money in court.

(I’ve said it before. My conscience is clear. Now that there is a case, we need to face it in court. Let us leave it to the courts. There, I will defend myself.)

Revilla, Senators Jinggoy Estrada and Juan Ponce Enrile face arrest after they were charged for plunder before the Sandiganbayan. (READ: Enrile ready for Crame; Jinggoy to give speech, too)

They are accused of conniving with scam mastermind Janet Lim Napoles to funnel development funds meant for the poor to dummy non-governmental organizations in exchange for millions of pesos in kickbacks. 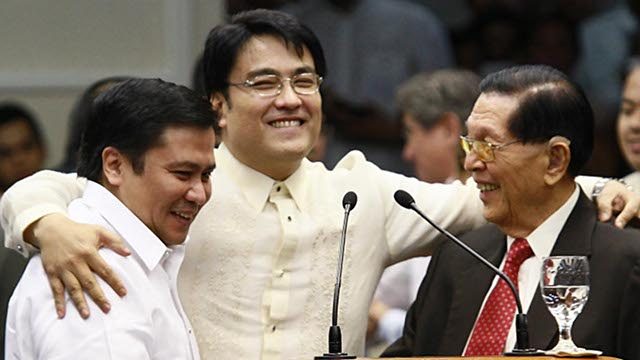 In the first part of his speech, Revilla sent a message to Aquino: “Lead this country not with hatred but with love.”

“Hindi magandang maalala ka lang sa pagpapakulong sa mga ‘di mo kaalyado. Jailing oppositors is not the only legacy to leave behind,” Revilla said. (It’s not good for you to be remembered just for sending non-allies to jail.)

The opposition senator said that even if he and Aquino have many differences in politics, they have a common goal to uplift the Philippines.

Revilla then touched on different issues ranging from the Ninoy Aquino International Airport to the power crisis in Mindanao to the plight of victims of Super Typhoon Yolanda (Haiyan). Beyond the pork barrel scam, the senator said it was about time the administration and the public focus on “more important issues.”

(It’s a rare opportunity to be President of the Philippines. You are fortunate. Lead the country in progress so that the 6 years will not be wasted. It is terrible to be weighed by history and to be found wanting.)

Revilla even said he is open to working with Aquino.

(I hope we help each other so that the lives of each Filipino will become decent. I do not doubt that the country can rise when the leaders help each other. There are many good people in Congress, the bureaucracy, the private sector. What we need to do is to unite. We can do this!)

The senator who has cried trial by publicity also had a message for the media, appealing to journalists’ “commitment to responsibility and sensitivities.” While the Napoles list named supposedly corrupt officials who benefitted from the scandal, Revilla sought to be more positive in his list that he called “mas matindi sa iba pang listahan” (stronger than any other list.)

“First on my list is God. Nagpapasalamat ako sa Diyos na alam kong ‘di ako bibigyan ng pagsubok na ‘di ko malalagpasan.” (I thank God because I know he will not give me a challenge I cannot bear.)

Revilla then honored family members and friends, who were present to watch and support him at the Senate. Wife Cavite Representative Lani Mercado-Revilla, son Vice Governor Jolo Revilla, brother Bacoor, Cavite Mayor Strike Revilla and the senator’s close friend and partymate Leyte Representative Martin Romualdez were behind him.

The senator then named his colleagues one by one to thank and praise them.

Despite the animosity sparked by the Senate probe into the pork barrel scam, Revilla had kind words for blue ribbon committee chairman Teofisto “TG” Guingona III.

“Kaibigan pa rin kita. Ikaw ang number one. Lead the blue ribbon committee in fulfilling its true mandate,” he said. (You are still my friend. You are number one.)

The emotional speech was interrupted by fits of laughter when Revilla addressed Senators Lito Lapid and JV Ejercito, half-brother of Senator Estrada.

To his fellow actor, he said of Lapid, “Ikaw ang Leon Guerrero ng masa.” (You are the Leon Guerrero of the masses.) It was a reference to the popular title role Lapid played.

To Ejecito, he quipped, “I only have one request: reconcile with your brother!”

Revilla was both humorous and emotional when addressing his co-accused. He told Estrada, “Kakosa! Magkakasama pa tayo. ‘Di ito ang katapusan natin. God is preparing us for something better.” (Cellmate, we will still be together. This is not our end.)

He had only the highest praises for the 90-year-old Enrile. “Manong, I can only wish I live a full life like yours. You are one of the greatest leaders of this country. Your brilliance, experience were brought to this institution. You are undoubtedly the ultimate statesman.”

After months of crying political persecution, Revilla chose to use his privilege speech to pay tribute to his fans.

Almost in tears, he said, “Di ako magsasawa kilalanin kayo na kayo ang dahilan bakit ako naging Bong Revilla.” (I will not tire of acknowledging that you are the reason I became Bong Revilla.) – Rappler.com