Why the defense sees Corona acquittal

May 28, 2012 9:42 AM PHT
Facebook Twitter Copy URL
Copied
The defense's 3 main arguments include: a defective complaint, non-disclosure done in good faith, and Corona not committing an impeachable offense 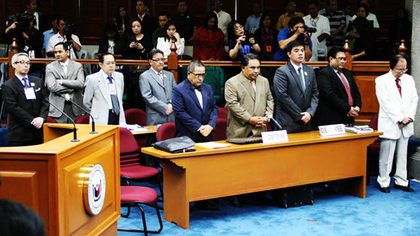 As Chief Justice Renato Corona left the witness stand for a final time Friday, May 25, defense lawyers closed their case with newfound confidence, relieved and grateful he took their advice to return and face the impeachment court.

After Corona’s Tuesday, May 22 walkout almost killed any chance of an acquittal, Corona’s return to the stand despite health issues proved he had nothing to hide, lead counsel Serafin Cuevas said.

Corona’s appearance and offer of an unconditional waiver to examine all his peso and dollar accounts dispelled rumors, said Cuevas, that the Chief Magistrate walked out to avoid cross-examination. He, after all, accepted questions of the senator-judges.

And, the defense team argues, he bared all.

But counsels also believe that the Chief Justice helped his own case, after he highlighted in his testimony the defense’s 3 main arguments for an acquittal.

Since Day 1, the defense has insisted that the case against the Chief Justice is defective and without basis. They argue that it was railroaded and that Corona was not afforded due process.

To bolster their argument, Rep Tobias Tiangco of Navotas, a defense witness, told the court that on the day Corona was impeached, congressmen were shown a brief Powerpoint, not allowed to ask any questions, and asked to sign the complaint.

The drafted impeachment complaint prepared by only 5 prosecutors was signed in a matter of hours on Dec 12, 2011.

This is further proven, they say, by the illegal fishing expedition conducted by the prosecution for evidence that, to begin with, they did not have. The defense points to the subpoenas that the prosecution requested left and right from the impeachment court, both witnesses and documents, and cited evidence that mysteriously made their way to the hands of the prosecution either through anonymous sources or unreliable means throughout the trial. This, after the complaint had already been filed.

“It is an indelible defect that will keep on cropping up, we cannot avoid it,” said defense counsel Dennis Manalo. “The issue on whether the complaint is actually valid or not…it is our position that it is inherently defective.” In Corona’s testimony, he provided a reason for why he believes he was singled out: the Supreme Court’s November ruling on the immediate distribution to farmers of of Hacienda Luisita, a 4,900-hectare agricultural estate owned by the President’s family. He insisted that Malacañang used all its resources to exact revenge and impeach him.

Defense lawyers have echoed the accusations, declaring that several government agencies have conspired against the Chief Justice, including the Bureau of Internal Revenue (BIR), The Land Registration Authority (LRA) and the Commission on Audit (COA) because of the President’s supposed fixation on removing Corona from office.

As evidence, lawyers point to the list of 45 properties allegedly owned by Corona that the LRA provided the prosecution. The list turned out to be largely unreliable, having included properties already transferred or not even listed under Corona’s name. They also criticized the BIR for starting an investigation on the supposed discrepancies in Corona’s assets according to his SALNs only after the impeachment began.

The head of all 3 agencies were appointed by President Benigno Aquino III.

The issue of the complaint being unconstitutional has always been a core problem for the defense. Even before the hearing started, Corona’s counsels asked for a pre-trial — only to be denied by the court.

In March, Corona filed an urgent petition with the Supreme Court asking that they stop the impeachment trial and nullify the complaint filed against him. It cited grave abuse of discretion by the impeachment court after it issued subpoenas for bank accounts as requested by the prosecution, and called the complaint “null and void” as it was transmitted — without due notice and hearing — to the Chief Justice.

“Kung hindi nakapag-establish ng prima facie case ang complainant…(If the complainant failed to establish a prima facie case) [the accused] enjoys what is known as the right to be presumed innocent,” insisted Cuevas on the day both sides closed their cases.

The petition has yet to be decided on, but two months later, on the cusp of the verdict, Corona and his lawyers still believe in the arguments of the petition fully and completely.

So completely in fact, that Cuevas has voiced the possibility of turning to the High Tribunal yet again in the event that Corona gets a conviction. Cuevas said in a radio interview that they may appeal the decision if it is not in their favor, since the Constitution does not state any prohibitions from doing so.

“Hindi po naman namin maaaring gawing magpikit-mata na lang, maghalukipkip at tanggapin na lang kung ano ‘yan (We can’t just close our eyes and accept the decision whatever it may be),” he said, adding that he and his team sincerely believe that Corona has not done anything to deserve an impeachment.

The defense believes, and the prosecution agrees, that the meat of the charges fall under Article 2, which alleges the Chief Justice failed to disclose his SALNs to the public and to truthfully declare his assets.

The other articles of impeachment, Article 3 (which accuses Corona of flip-flopping Supreme Court decisions), and Article 7 (which alleges partiality in granting a temporary restraining order to former President Gloria Macapagal-Arroyo), are, to the defense, a non-issue. Corona’s lawyers are confident the prosecution has not been able to strongly present any evidence to convict him under these two articles.

On the stand, Corona addressed the accusations thrown against him under Article 2, candidly admitting that he has about US$2.4-M and about P80-M that he did not declare in his SALNs.

His explanation for the combined amount of P183.2-M is simple and straightforward — he did not, in his own personal judgment as the chief justice of the Philippines, think he needed to declare them.

Corona also insisted that other public officials do not often declare their dollars in their SALNs because of this law.

While he explained the source of these funds — (he and his wife supposedly saved in dollars from as early as the 1960s, money that virtually remains untouched and which has compounded by interest) — to his lawyers, only one thing matters. To them, the dollars were undeclared simply because of Corona’s understanding of the law on foreign currency deposits. Republic Act 6426 exempted dollars from SALN declaration. Similarly, Corona argued, that the supposed P80-M worth of peso deposits under his name are not his, and are actually commingled funds.

According to Corona, about P34.7-M are owned by his wife Cristina’s family corporation, Basa-Guidote (BGEI). Another P10-M was earned by BGEI through interest over 11 years.

He said P15-M belonged to his daughter Charina, who works two jobs as a physical therapist in the US, P4-M to his other daughter Carla, and P2-M to his son Francis. An additional P8-M, he said, was earned through interest. The rest is his mother’s money, cash that was used for check-ups and medical expenses when she was still alive.

Corona also explained they kept the money in one fund because the larger the amount, the higher the interest earned. But he insisted the money was not all his. This is it, this is all.

To the defense and Corona, there was no intention to hide the money — the non-declaration was done in good faith. And the prosecution has no evidence to prove otherwise, that he had intentionally left out the P183.2-M for any other reason.

After all, Corona did declare his 5 properties and the assets that are clearly his in his SALNs.

3) Not an impeachable offense

How then, the defense asks, can the court fault, or worse, impeach the Chief Justice, for offenses committed in good faith?

Cuevas insisted that Corona’s failure to disclose all his assets is not an impeachable offense.

The impeachment complaint categorizes the failure to truthfully disclose assets in SALNs under betrayal of public trust and culpable violation of the Constitution. But Cuevas refuted the betrayal of public trust, saying this only refers “to an act committed by the public officer in relation to his public duties.”

Cuevas explained that if an impeachable public officer, for instance, failed to pay somebody he owes, he may have committed a violation of the law, but he still cannot be impeached, as it is not linked to the discharge of his duties. Following the same logic, Corona’s failure to disclose his assets in his SALN does not relate to his duties, and therefore, cannot be categorized as “betrayal of public trust.”

As for culpable violation of the Constitution?

Corona pointed out in his testimony that there has not yet been a Supreme Court decision that dictates which law should be given precedence between the Foreign Currency Deposit Act and the 1987 Constitution, which asks public officials to declare their wealth. He said given the conflict, he chose to follow the law on foreign currency desposits which calls for confidentiality.

In addition, defense lawyers have said that the SALN does not outwardly state that foreign accounts must be included.

It is an arguably innocent mistake. The defense maintains that Corona cannot be convicted for anything else — not the source of his funds, or the Anti Money Laundering Council report that alleges Corona has $12-M in fresh deposits, the credibility of which, the defense continues to question and attack. “You cannot prove something that which is not alleged,” Cuevas reminded the media.

For all these reasons, Corona is innocent, they insist, with their heads held high. – Rappler.com