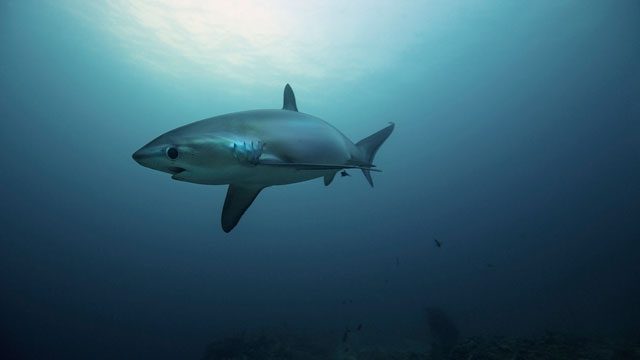 Facebook Twitter Copy URL
Copied
The meat, to be used as ingredients for tempura and fish balls, comes from thresher sharks, a 'vulnerable' species

CEBU, Philippines – Police in Cebu province have seized half a ton (1,100 pounds or nearly 500 kilograms) of shark meat destined for use in fried fish snacks, the head of an illegal fishing task force said Saturday, June 14.

Meat from thresher sharks, a species listed as “vulnerable” by the International Union for the Conservation of Nature and Natural Resources (IUCN), was found onboard a truck in the central island of Cebu on Wednesday, said Loy Anthony Madrigal, head of the Cebu task force.

“The people on board the truck…said they were just transporting fish. But when we checked the cargo, we found boxes of large chunks of shark torsos and packs of shark meat to be used as ingredients for tempura and fish balls,” he said.

Madrigal said sources had tipped him off about the cargo and told him that some companies in Cebu use shark meat for Japanese-style fried tempura and in fish balls, an Asian snack made from processed fish commonly sold on skewers by street vendors.

A fisheries expert tested the meat and later confirmed that it came from thresher sharks, a type of shark with a long tail which it uses to stun prey.

The haul was found aboard the truck belonging to a fish supplier, he said, adding that the truck driver and two assistants were all arrested.

Madrigal warned that illegally butchering the sharks could result in a maximum of 20 years in jail.

The IUCN lists thresher shark populations as declining due to overfishing and says they could possibly face extinction unless conservation measures are taken. The sharks are usually caught using nets. – Rappler.com