On Friday morning, the anti-graft court Sandiganbayan ordered the senator’s arrest and detention after it found probable cause to try him in court in connection with the biggest corruption scandal in the country in recent years.

From the Sandiganbayan, Revilla, his lawyers and family members were brought to the multi-purpose hall of the PNP Friday noon, where he underwent booking procedures. (IN PHOTOS: The PNP Custodial Center)

A huge crowd of supporters followed him in the PNP camp, but the police barred them and the media from entering the hall. 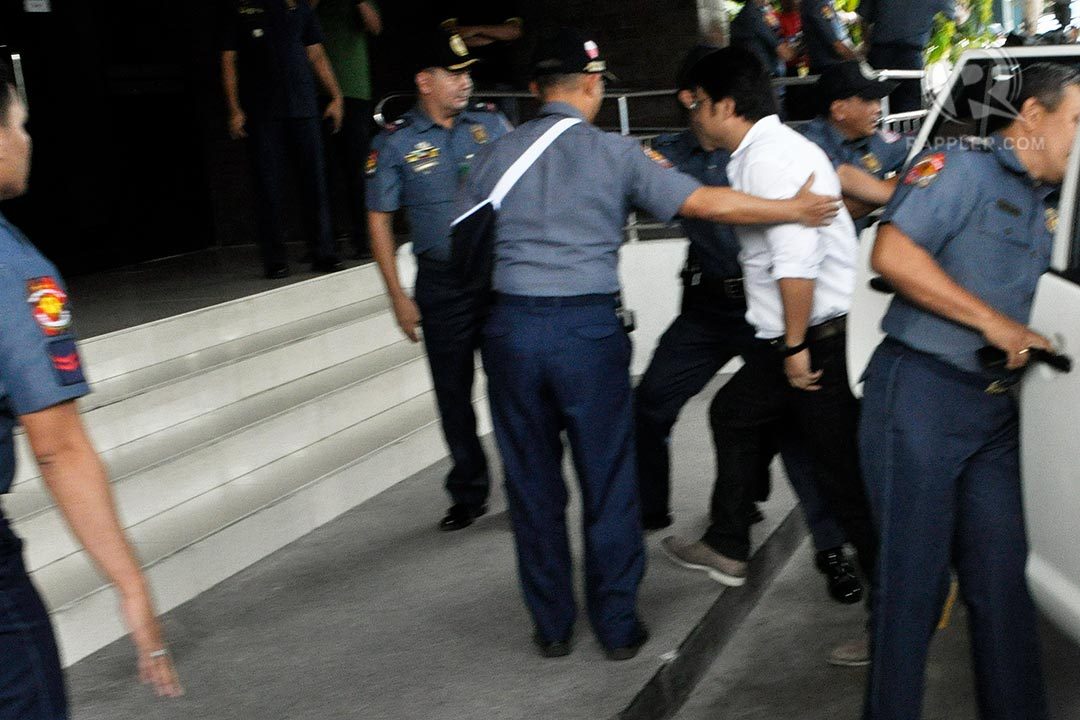 At 2 pm, mugshots were already taken. Revilla however asked to spend more time with his family before he is brought to the PNP Custodial Center, Sindac added.

Results of Revilla’s medical examination were normal, Sindac said. The senator’s blood pressure just slightly went up because Revilla said he was “tired last night.” Revilla was with supporters and his family Thurdsday at the mansion of his father, former Senator Ramon Revilla, in Bacoor, Cavite.

By 2:50 pm, Revilla was already brought to a police car en route to the nearby detention center.

Friends and family already started paying him a visit. They include his wife Lani, sons Jolo and Bryan, movie actor-friend Philip Salvador, and Antipolo City Mayor Jun Jun Ynares, the senator’s brother-in-law. Visitors are allowed up to 4 pm, according to the police. He earlier asked the court to allow him to post bail even if plunder is a non-bailable offense.

Revilla, a movie actor, is one of 3 senators who have so far been accused of participating in a years-long scam in which many politicians allegedly embezzled hundreds of millions of dollars that should have been spent on development projects. (READ: Bong Revilla’s biggest battle)

One of the other senators who has been indicted and facing arrest is Juan Ponce Enrile, a 90-year-old politician famous for his cunning who was defense minister during dictator Ferdinand Marcos’s martial law regime. (READ: At 90, Enrile a bundle of contradictions)

The other is Jose “Jinggoy” Estrada, the son of former president Joseph Estrada who was toppled in 2001 in a popular uprising triggered by his plundering of government coffers while in office.

All 3 senators have protested their innocence, insisting they were targeted simply because they were members of the political opposition.

But the Aquino administration has hailed the charges filed against them as a vital moment in its quest to fight corruption. “This is a milestone,” Justice Secretary Leila de Lima, who endorsed the case against the 3, told AFP.

Revilla’s ties with Napoles could not be denied as photos that showed him attending parties she hosted could not possibly lie.

Besides, his son Leonard Bryan Bautista, known in showbiz circles as Bryan Revilla, is a business associate of Janet’s son, James Christopher. The two are said to have known each other from their high school days. – with reports from Agence France-Presse/ Rappler.com