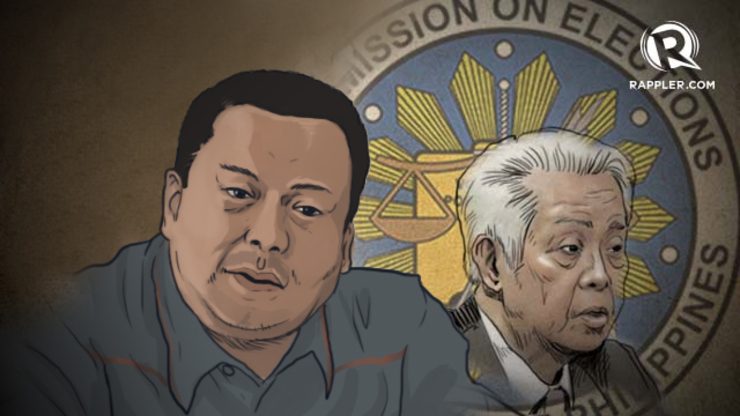 MANILA, Philippines – In reviewing election expenditures during the 2013 midterm polls, the Commission on Elections (Comelec) is not singling out opposition Senator JV Ejercito.

This was the statement made by Comelec Chairman Sixto Brillantes Jr in an interview on DZBB on Friday, June 27, as he clarified that the poll body is also looking into the statement of election contributions and expenses (SOCE) of other candidates.

(We are looking at all the candidates in the 2013 elections, including JV Ejercito. I said that we are checking all those who submitted SOCEs as to whether they are within the expense limit or they exceeded it.)

Brillantes is reacting to Ejercito’s statement in a previous DZBB interview that Comelec is “targeting” members of the Ejercito-Estrada family.

Ejercito’s father, former President and now Manila mayor Joseph Estrada, is facing a disqualification case before the Supreme Court. It was filed by lawyer Alicia Vidal, who also filed the same case against him before the Comelec. The SC allowed Estrada’s 2013 opponent, Alfredo Lim, to intervene in the case.

Vidal’s petition seeks to disqualify Estrada from the Manila mayoral race on the basis of his earlier conviction for plunder in 2007. Estrada was granted pardon by then-President Gloria Macapagal-Arroyo a month after his conviction.

Meanwhile, the senator’s first cousin, ER Ejercito, was retroactively disqualified and ousted as Laguna governor by the poll body last May for overspending during the 2013 polls.

“The disqualification case of Mayor Estrada was dismissed by Comelec. The case was elevated to the Supreme Court, but he won at Comelec,” said Brillantes.

The poll body ruled that the presidential pardon restored his right to vote and run for public office. (READ: Erap on disqualification case: Respect the voters)

As for ER Ejercito’s case, Brillantes said that Comelec acted upon a disqualification case filed against him by former Laguna congressman Edgar San Luis.

Brillates said that Comelec’s Campaign and Finance Unit will clear Ejercito if there are no issues with his SOCE.

Senator Ejercito received P135.93 million in contributions and spent P138.21 million in the 2013 midterm elections, according to his SOCE.

His total expenditures is below the maximum P153 million (around $3.5 million) allowed by the law for senatorial candidates.

Brillantes also reminded winning and losing candidates in the 2013 midterm and barangay elections who have deficient SOCEs that they have only until Monday, June 30, to correct or complete their requirements. – Rappler.com