In his manifestation and motion for leave of court to travel abroad, Cunanan said his duties as World Secretary General of Junior Chambers International require him to be in Japan and the US on different dates.

Cunanan, former Technology Resource Center (TRC) director general, also asked the court to allow him to travel to Japan on July 7 to July 15, and to the US on July 20 to August 3, 2014.

Cunanan however said he is willing to cut short any of his trips once ordered by the court to return.

To convince the court he is not a flight risk, Cunanan said he was also abroad at the time charges were filed against him. He did not flee then.

Cunanan said he “immediately made arrangements to attend to the instant cases.” He also voluntarily surrendered to the court upon the issuance of his arrest warrants, Cunanan pointed out.

Cunanan was admitted by the Department of Justice as a provisional state witness on March 20, 2014. 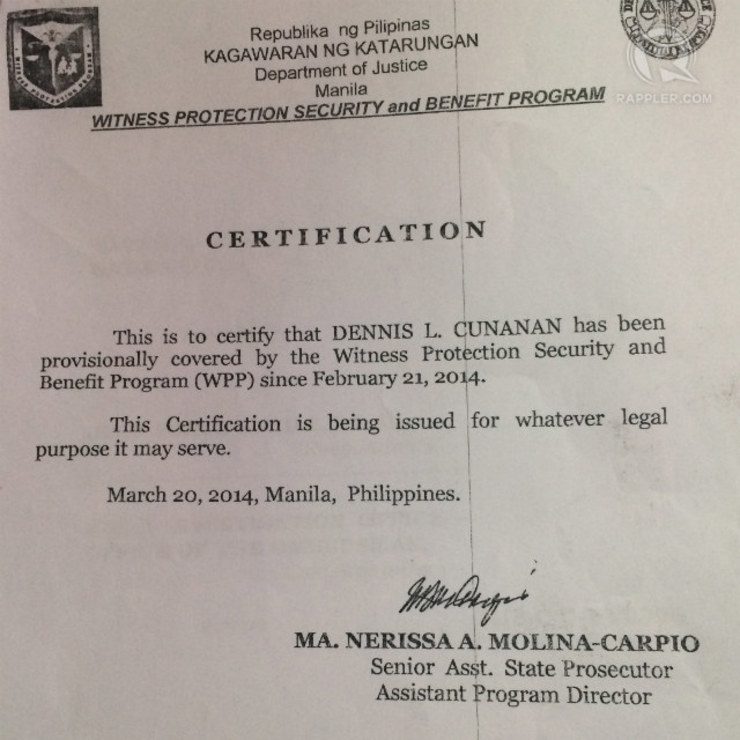 The Ombudsman denied his application as state witness in the cases related to the controversial multi-million-peso pork barrel scam. (READ: Cunanan can’t be state witness)

In a 16-page order released Thursday, June 5, Ombudsman Conchita Carpio-Morales denied his application for immunity from criminal prosecution and his motion for reconsideration (MR) against his indictment over the scam.

The Ombudsman found that Cunanan failed to meet “all the qualifications to be discharged as immune witness.”

He has since filed a motion for reconsideration (MR) on the Ombudsman’s denial of his application, believing his testimony is crucial in the pork scam cases. DOJ Secretary Leila de Lima earlier indicated she will not yet lift the protection provided to Cunanan by the DOJ Witness Protection Program, until the Ombudsman resolves the MR on his application.

Cunanan is accused of violating the Anti-Graft and Corrupt Practices Act in relation to the illegal diversion of lawmakers’ Priority Development Assistance Fund to fake projects coursed through the TRC. – Rappler.com