MANILA, Philippines (UPDATED) – The Makati Police District (MPD) confirmed on Wednesday, July 2, the boarding house in Makati City where a hazing ritual by Tau Gamma Phi fraternity killed one and injured 3 others on Saturday.

The investigation was turned over to the MPD Tuesday night, July 1, after an informant approached the Manila Police District and located the house in Calatagan St corner Hilario St, Barangay Palanan, Makati. (READ: Binay to hazing suspects: You can’t hide forever)

Lukban ordered an initial ocular inspection of the place Wednesday morning, but it only pushed through in the afternoon.

The informant, Jemar Pajarito, as well as members of the Makati police, the National Bureau of Investigation, and the Scene of the Crime Operatives were present during the inspection.

Pajarito, however, refused to talk to media.

Based on Pajarito’s initial statement, Lukban said the hazing occurred around 4 pm of Saturday, June 28, until “late night time.” 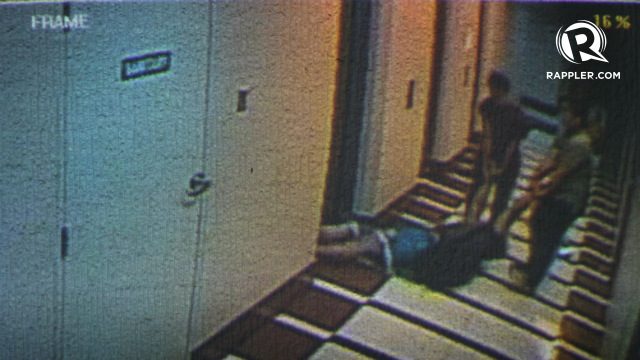 “Masasabing tumutugma naman [ito] sa statement kung kailan sila natagpuan sa condominium (This is consistent with the statement regarding the time the victims were found in the condominium),” he said.

The MPD also received the initial affidavit of the security guard of One Archer’s Place, located along Taft Avenue in Manila, where the victims where dropped off after the initiation rites. Lukban said this is not enough basis for a complaint. (READ: St. Benilde student dies in suspected hazing incident)

The Makati police is expecting the victims’ lawyers to file a formal complaint on Wednesday – either before the MPD or the Manila Police District.

Lukban said a case conference may be convened on Wednesday night to assign the case to investigators – if there is a formal complaint, the results of the ocular are in, and the Makati police are in receipt of other documents from the Manila police.

Since a complaint has yet to be filed, Pajarito is not yet considered a suspect.

(After he let his companions from Tau Gamma Phi enter the house, he left with his family. He is not surrendering as a suspect.) He will, however, be given the chance to give an official statement on his actual participation during the incident.

“He needs to tell all facts and truth regarding the case para mabigyan ng (so that he can be given) consideration [as] possible state witness,” Lukban explained. (READ: FAQ: On becoming a state witness)

At least 11 suspects are believed to be behind the hazing ritual conducted Saturday involving college students from the De La Salle-College of St Benilde (DLS-CSB). (READ: Aquino condemns hazing: It ‘escapes any logic’)

Guillo Cesar Servando, who died from the ritual, along with John Paul Raval, Lorenze Agustin, and another 17-year-old man were brought from One Archer’s Place to the Philippine General Hospital on Saturday.

Servando was pronounced dead on arrival, with an autopsy report pointing to injuries in the back and legs as cause of death. The other 3 are still recuperating. (READ: College students call for review of Anti-Hazing Law) – Rappler.com