Corona to use different lawyers? 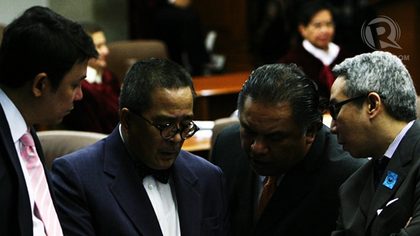 MANILA, Philippines – It seems not only the nation, senators, and the media are relieved the nearly 5-month-long impeachment trial of former Chief Justice Renato Corona is over.

Unsurprisingly, the lawyers of Corona, most of whom say they volunteered their services for free, are just as glad the trial has ended. Unfortunately for them, the court decided to convict their client.

After the guilty verdict was served by the Senate impeachment court, Corona released a statement that said he has accepted the decision. He gave his lawyers a simple instruction.

But in the event Corona decides he does want to ask the Supreme Court to appeal the decision, the 12 lawyers who stood by his side may not be the same ones in the future.

Defense counsels have mixed views on whether or not they should turn to the High Tribunal.

But defense counsel Judd Roy explained that as lawyers, it is their duty to study and use all possible legal remedies for their client if he so chooses. Roy did mention, however, that the various feelings about appealing the decision is one of the issues they have yet to deal with.

“That is one of those things that is on the table. Lawyers have different points of view about what should happen,” he told Rappler.

He said lawyers had volunteered to help Corona in the impeachment trial because of certain values they believed in, but that appealing to the Supreme Court “would be a different matter altogether.”

Roy also expressed concern about the backlash that could ensue if they aggresively challenged the decision, admitting it might “send a very poor signal.”

Lead counsel Serafin Cuevas shared the same thoughts, acknowledging that the team would have to be careful if they decided to continue pushing for the case, as it may affect their reputation as lawyers.

Salvador, who told the media that he thinks the process is over, added that it is unlikely the whole defense team will continue their work with Corona.

“Hindi na siguro niya kailangan ng 12, pipili na lang siya sa amin. ‘Yung iba rin kasi kailangan na rin bumalik sa trabaho nila, may iba nang plano (He probably won’t need all 12 of us. He’ll just choose among us. Some of us need to return to work too and have other plans),” he said.

Cuevas echoed this, saying he could not comment on the defense team’s next move, as there is a possibility he may not be part of Corona’s team anymore.

“For instance, kung halimbawa gusto ni Chief Justice na gawin niya [iyan] eh ayaw na kay Justice Cuevas? Eh kung sabihin sa akin, sige Justice, pag-aaralan ko, then he gets another lawyer? I can’t tell you what’s his next move,” he said. (For instance, if for example, the Chief Justice wants to do it but does not want Justice Cuevas? If he tells me, okay Justice, I’ll study it, then he gets another lawyer?)

If Corona were to decide he wants to appeal the decision of conviction against him, he will need to prove that the impeachment court exhibited grave abuse of discretion. – Rappler.com