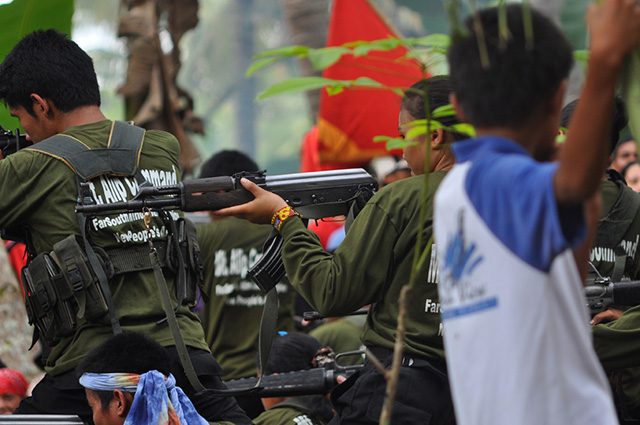 Two rebels were killed while two cops were wounded, according to Major Christian Uy, spokesman of the military’s 4th Infantry Division, who said guerrillas aboard a truck raided the station at 3 pm Thursday. (Editor’s note: We earlier reported that the cops were killed. We regret the error.)

Surigao del Norte police spokesperson Police Inspector Elsa Montenegro confirmed that the NPA also seized and brought with them 4 cops when they retreated.

Montenegro identified the cops captured by the rebels as PO3 Vic Calubag Concon and PO1 Rey O’niel Morales from the Alegria Municipal Police Station and PO1 Joen B. Zabala and PO1 Edito F. Roquiño from the Provincial Public Safety Company.

Meanwhile, the cops wounded in the firefight were identified as PO2 Romero Beniga Dagsa and PO2 Reuben Casimiro Salino.

The rebels carted away an M14 rifle, 4 M16 rifles and a shotgun. But in their retreat, they also left behind one AK47.

“Firefight lasted for about 30 mins and the NPA overran the municipal police station,” Uy said.

The rebels then retreated to the villages of Siringan and Bliss in the town of Kitcharao in Agusan del Norte, using logs to block portions of the road. By 9 pm Thursday, the logs had been removed.

Military troops who provided reinforcement managed to intercept the fleeing rebels in Barangay Puntod in Alegria, causing a 10-minute firefight. No casualties were reported in the clash. – Rappler.com