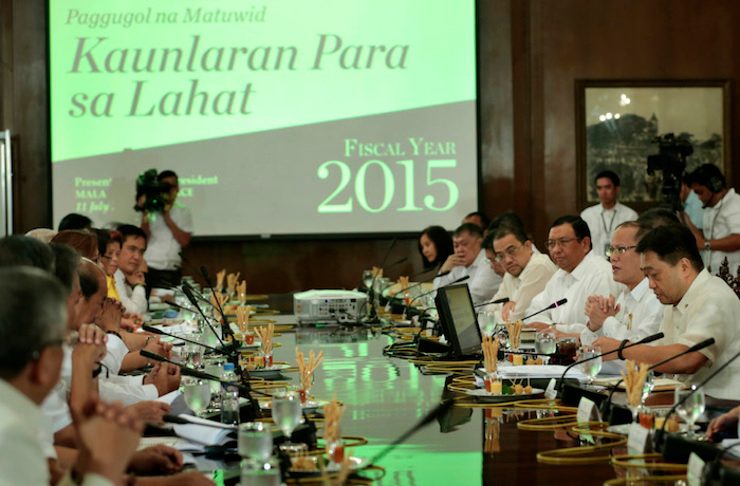 Facebook Twitter Copy URL
Copied
(2nd UPDATE) 'To accept his resignation is to assign to him a wrong, and I cannot accept the notion that doing right by our people is a wrong,' says Aquino
MANILA, Philippines (2nd UPDATE) – President Benigno S. Aquino III on Friday, July 11, announced that he did not accept the resignation offer made by Budget Secretary Florencio “Butch” Abad over the Disbursement Acceleration Program (DAP).

The President made the statement prior to the presentation of the proposed 2015 national budget at Malacañang’s Aguinaldo State Dining Room, where Abad and the rest of his Cabinet officials are present.

“Yesterday Secretary Abad gave me a letter tendering his resignation from the Cabinet. I have considered the same and I’ve decided not to accept his resignation. Let me explain why,” Aquino said.

The President explained, “The notion in the current atmosphere is DAP was bad for our people. Even our most vociferous critics grant that DAP has benefitted our people.”

Cabinet officials were seen applauding the announcement, except Vice President Jejomar Binay, who had earlier urged the Aquino administration to prove its “good faith” in the DAP by disclosing all 116 projects funded under the program, and by subjecting it to an “independent audit.”

A few hours later, Vice President issued this statement: “The President has made a decision and I respect his decision. The decision to accept or reject the resignation is the prerogative of the President.”

There has been a clamor for Abad to resign over the DAP, after the Supreme Court declared parts of the program unconstitutional.

The DAP is an economic stimulus program implemented by the Aquino administration in 2011, where funds for slow disbursing projects were moved to fast-disbursing ones, to spur economic growth.

Asked to comment on the resignation offer of Abad and the President’s decision not to accept it, Navotas Representative Toby Tiangco, UNA spokesman, said  in an interview with ANC, “Bad script, bad acting, and bad faith. There was no sincerity.”

Bayan Muna Partylist Representative Neri Colmenares said in statement that the resignation offer of Abad is a “clear admission that the Disbursement Acceleration Program (DAP) is wrong and that President Aquino’s non-acceptance of Abad’s resignation is his way to protect himself.”

“Whatever Malacañang says billions of pesos have been lost through the DAP and they should be held accountable for it. This further proves that filing an impeachment case against President Aquino and criminal charges against Abad is the right thing to do,” Colmenares said.

Kabataan Party-list Representative Terry Ridon, who led youth groups that filed plunder charges against Abad before the Ombudsman, also told the news station that Abad’s resignation is “insincere” since it was not irrevocable.

“I think the position of Secretary Abad and the President is  really to confirm the validity of the Disbursement Acceleration Program and to fight the Supreme Court decision on it,” Ridon said in an interview with ANC.

Leonor Briones, former national treasurer and co-convenor of Social Watch Philippines, said that it was a “matter of honor” for Abad to resign, though Aquino’s decision was “expected.”

“Let’s see what happens after this because clearly, the action of Butch Abad and the action the President do not respond to the expectations of the  people,” Briones told ANC.

Senator Francis Escudero said the Senate committee on finance, which he chairs, has summoned Abad to explain the DAP in a public hearing scheduled on July 21.

Escudero said in a statement on Friday that he wants Abad to clarify reports that the total disbursed funds under the DAP amounted to P372 billion, which does not tally with the list provided by the budget department which is over P200 billion.

He would also ask the Cabinet official to identify the fund releases under the DAP deemed unconstitutional by the Supreme Court.

“If we want to scrutinize the DAP releases under the guidance of the SC decision, we need all the papers that only DBM can provide,” the senator said.

He said that the Senate finance committee is carefully studying the Court decision to ensure that the next budget we will be crafting and approving will be compliant with the Supreme Court decision on the DAP.”

Escudero has directed Abad to submit to the Senate panel the complete list of the all the Special Allotment Release Orders (SAROs) disbursed under the DAP, including “projects/purpose and the amount of the releases.”

“You have been asking us which among our programs and projects were funded by the DAP….This is what we have been asking the DBM too since our last committee hearing: Where is the list?” Escudero said.

The committee hearing is the continuation of Senate proceedings that were suspended out of courtesy to the Supreme Court, which at the time was deliberating on the petitions against the DAP. – Rappler.com