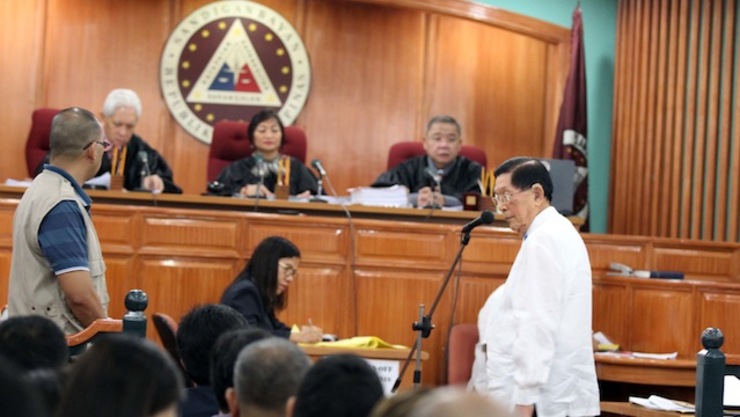 MANILA, Philippines – Indicted plunderer and opposition senator Juan Ponce Enrile will be arraigned on July 18 at the earliest for his 15 counts of graft.

This, after the anti-graft court Sandiganbayan’s 3rd division decided to first resolve the prosecution’s pending motion to admit amended information in his graft cases.

During the scheduled arraignment on Friday, July 11, Enrile did not enter any plea for his plunder case.

But he and his co-accused will have to wait for another week to be read their charges for graft and plead before the court.

The prosecution wanted to change the use of “SubAROs” to “SAROs” in its Information or charge sheets for the graft cases.

A SubARO, as defined by the budget department, is a specific authority issued by the central office or regional office of a department or agency to its lower operating units which allow them to incur obligations during a specific period. In contrast, a SARO is issued by the DBM itself to identified agencies.

Prosecutors were earlier admonished by Justice Rafael Lagos of the court’s 1st division for their use of SubARO as evidential basis for the charge sheets in the graft cases. He said these were unrelated evidence, even questioning the prosecutors if they knew the difference between the two release orders in the first place. (READ: PDAF case prosecutors hit for evidence used)

In an interview, lawyer Willie Rivera, legal counsel for alleged pork scam mastermind Janet Lim-Napoles, said the prosecution is “confused” over its stand.

“They’re having two diametrically opposed positions,” Rivera said, pertaining to the prosecution’s opposition to Enrile’s motion for a bill of particulars and their move to amend the charge sheets in the graft cases.

A bill of particulars would clarify and specify in detail the charges against Enrile.

Rivera said the prosecution’s opposition to a bill of particulars only shows they believe the charge sheet for Enrile’s plunder case is sufficient and not vague or “lacking in details” – as the defense claims. But at the same time, he said, their move to amend the charge sheets shows they are not confident about their cases.

Enrile’s motion for a bill of particulars was denied by the court Friday morning. The court’s denial was cited by lawyer, Estelito “Titong” Mendoza, as among the reasons why his client did not enter any plea.

Mendoza said the bill would have enabled their camp to clearly understand the charges against Enrile and plead accordingly.

Meanwhile, Rivera reiterated that the charges against the accused in the pork barrel scam were vague and repetitious.

He said if common evidence is used in the plunder and graft cases, then the other must be withdrawn.

“It’s the same thing. When you’re saying its plunder, it’s a repetition of commission of the offenses in the anti-graft,” he said. – Rappler.com