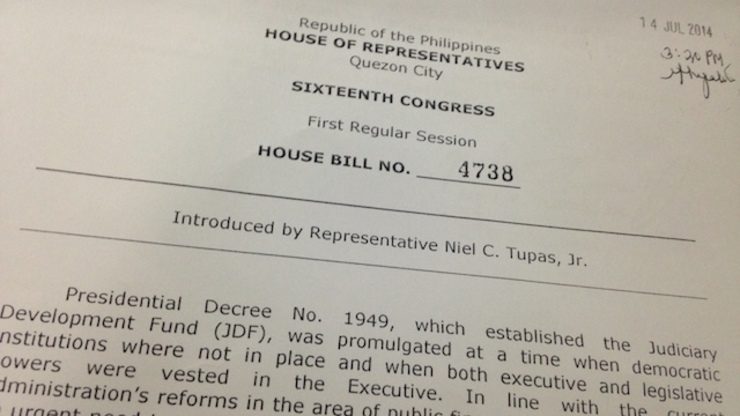 MANILA, Philippines – Did the Supreme Court (SC) think it can get away with its rulings on the lawmakers’ pork barrel and Malacañang’s spending program?

The JDF, which is sourced from various legal fees collected by courts nationwide, amounts to about P1 billion ($23 million)* every year. The SC is supposed to use the money for the cost of living allowances of employees (80%) and improvement of the courts (20%).

House Bill 4738 or “The Act Creating the Judicial Support Fund (JSF) under the National Treasury, repealing for the purpose Presidential Decree No. 1949” seeks to transfer the power to allocate JDF to Congress.

Unlike the JDF which is under the control of the SC, the JSF will be remitted to the National Treasury and Congress will decide how it will be spent.

“It is just a coincidence that it was also filed the same day the President spoke to the nation,” Tupas said.

The Commission on Audit over the weekend also released a report again raising questions about the SC’s use of its savings amounting to P3.19 billion ($73.3 million). (READ: COA questions use of SC savings)

These proposals in the House of Representatives are expected to revive previous conflicts between the legislative and the judiciary.

They come after the High Court issued two landmark rulings in relation to how the other branches of government – the executive and the legislative – spend taxpayers’ money. The High Court ruled unanimously in both verdicts.

On July 1, 2014, the Court, again voting unanimously, ruled against the Aquino administration’s DAP, which made use of government savings to fund slow-moving projects.

The President said Monday the decision on DAP was “difficult to understand,” and some lawmakers and lawyers felt that he seemed to have issued a veiled threat to the justices in that speech.

Aquino is the first president in history to have succeeded in impeaching and removing a chief justice.

Tupas gave assurances he’s had “consultations (with SC justices)” on the pending measures, but “I don’t want to divulge the initial recommendation of that consultation.”

Moves to question the SC’s JDF have always been seen as a means of threatening the Court’s fiscal autonomy.

“This proposed legislation intends to emphasize that the constitutional grant of fiscal autonomy cannot and should not be used to frustrate the overriding constitutional principles of transparency, accountability and good governance,” Fariñas said in his bill’s explanatory note.

The JDF is separate from the Special Allowances for Judges (SAJ), which is not covered in the proposal of Tupas. But he said this should be abolished too. – Rappler.com