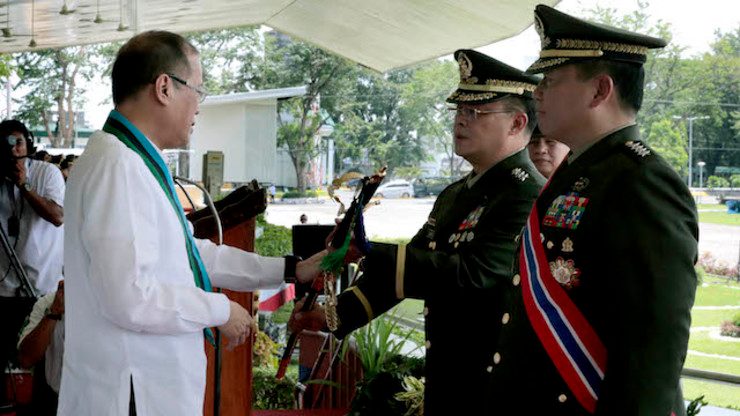 Facebook Twitter Copy URL
Copied
New Armed Forces chief Lieutenant General Gregorio Catapang Jr says he's long prepared for the job. 'I have prepared myself for this since I was told I was a candidate,' he says.

MANILA, Philippines – Lieutenant General Gregorio Catapang Jr assumes command of the 120,000-strong Armed Forces of the Philippines (AFP) on Friday, July 18, at a time when the military has to step up in the face of escalating maritime conflict with China and improve response to natural disasters.

There are those who believe the post has always been his. Catapang was also a shoo-in for the Army chief post that was vacated in February this year. When he was bypassed for this, Catapang’s supporters were surprised but thought perhaps it’s better to keep him commander of the Tarlac City-based Northern Luzon Command (Nolcom) until the AFP chief post is vacated in July.

It’s like this every time a big retirement in the military looms, especially one involving the AFP chief post.

The announcement precedes several months of speculative talk in military circles, pitting generals with the strongest links to Malacañang against each other. In the end, the President decides – usually at the last-minute – on who will be tasked to protect his government and his people. And it is this decision that can make or unmake the careers of soldiers, not only of the appointee but the circle of officers he will bring with him to the top.

The fate of Catapang, a former rebel soldier who plotted against the Marcos dictatorship, seemed to have taken a different course when President Benigno Aquino III appointed him vice chief of staff in May 2014, three months after he was bypassed in the selection of Army chief. From a major command overseeing 2 divisions, a naval station, and an air base in northern Luzon, he was “promoted” to occupy an administrative job in the general headquarters. Many wondered why he was being moved to a desk job. (READ: Surprise appointment for AFP chief contender)

But as one soldier put it, “It’s better to be the head of a dog than tail of the lion.”

As the retirement of AFP chief General Emmanuel Bautista neared, the rumor mill began to turn sour for Catapang. He was suddenly out of contention to replace his classmate in the Philippine Military Academy (PMA) “Dimalupig” Class of 1981, based on the talks.

But Catapang’s anti-Marcos background and his stint in Tarlac, the home city of the President, are not his only advantages. Unknown to many, the President and Catapang have known each other for decades. They were introduced to each other by Aquino’s cousin Rapa Lopa, who knew Catapang because a professor teaching a masters class in both the University of the Philippines (UP) and the Ateneo De Manila University (ADMU) mixed their classes together.

Catapang told Rappler he met Aquino after the 1986 EDSA People Power Revolution, where he joined the military revolt against the Marcos dictatorship as a member of the Reform the Armed Forces Movement (RAM). The revolt catapulted Corazon Aquino, the late mother of the incumbent president, to the presidency.

It was only on Thursday, July 17, when the speculation ended. That day, Gazmin informed Catapang of his appointment. Inside the Operations Center of the Office of the Civil Defense (OCD) where he got the news, the new AFP chief performed 10 push up exercises to comply with a naughty tradition for newly promoted generals of the military. (READ: One week ‘punishment’ for new AFP chief)

“It was a really funny thing…. I had to do the push up in front of the Secretary of National Defense while Executive Secretary Pacquito Ochoa was watching. It was really a funny incident,” Catapang recalled the day he received the good news. He will be the 5th AFP chief of staff under the Aquino administration and joins previous chiefs who have had short stints in their posts. Catapang will stay for only 12 months, as he is scheduled to retire on July 11, 2015, when he reaches the mandatory retirement age of 56.

Catapang shot down criticism that his appointment reflected once again the so-called revolving door policy in the military. “The changing of the guard is not a problem in the Armed Forces because we have a roadmap. We have a campaign that we just follow. Whoever takes over, there is no problem about the limit or the term of the chief of staff,” he said.

The troops shouldn’t worry about adjustments, he added. He will spend his term continuing the programs of his mistah, General Bautista.

“He left a legacy of the IPSP (Internal Peace and Security Plan) and the AFP Transformation Roadmap. They are all in the infancy stage. I have to nurture it,” he vowed.

Major General Donato San Juan, chief of the Special Operations Command (SOCOM), expects a smooth transition. The mistahs are alike in a way, he said.

“They share the same line of thinking. That’s a good thing. They have similar intentions for the improvement of peace and order,” said San Juan.

Catapang is passionate about IPSP Bayanihan, the brainchild of Bautista, as the appropriate counter-insurgency strategy. It was under Catapang’s watch that the entire area of Nolcom was declared insurgency-free although sporadic clashes have raised questions if the declaration was premature.

A contender for the AFP chief post, Iriberri immediately called to congratulate Catapang. “I told him that the Army is solidly behind him. We fully support him. We are happy. I am very happy for General Catapang,” Iriberri said.

No bad soldiers, only bad officers

Catapang said he has long been ready for the job. “I have prepared myself for this since I was told I was a candidate,” he told reporters a day before he assumes the top post in the military.

“We have been doing this for the last 30 years. When you go up the ladder and you know how it is down there in the frontline, we immediately know what to do. At the end of the day, it is the soldier in the foxhole who are fighting out there in the field who is your primordial concern,”  Catapang said.

Catapang recognizes that maritime tension with China is one of the military’s new challenges, along with terrorism and climate change.

Catapang has dealt will these issues first hand. A member of the elite Scout Ranger, Catapang has  been assigned to various posts conflict areas including Mindanao. His experience in disaster response began when he served under the Office of Civil Defense (OCD). He led operations in the aftermath of Ondoy, the tropical storm that submerged many parts of Metro Manila.

He rose in the military hierarchy beginning as commander of the Pampanga-based 703rd Infantry Brigade before he became chief of the Nueva Ecija-based 7th Infantry Division and later Nolcom, which was previously responsible over Panatag Shoal (Scarborough) – a flashpoint in the dispute between the Philippines and China.

Catapang said improvement in the professionalism of soldiers, upgrade of their training, and the modernization of their assets go hand in hand in effectively addressing the challenges that the military is facing.

“There are no bad soldiers, only bad officers. If the officers tolerate the misbehavior of soldiers, they will think it is good. But if they are cautioned immediately that these things are bad, they will correct these immediately. Leadersip is what we need in the Armed Forces,” he said. – Rappler.com