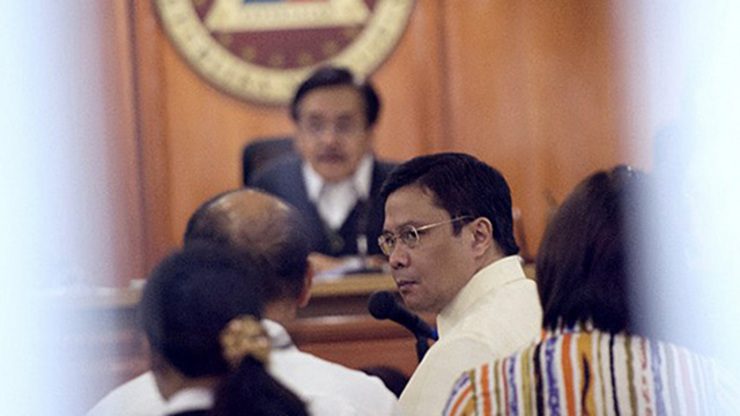 In an order issued by the 5th division, the court ruled in favor of an earlier motion filed by the Ombudsman on Estrada’s suspension, insiders told Rappler.

The Estrada camp told ANC it will ask the court to reconsider the order.

Prosecutors said it is mandatory for the anti-graft court to immediately issue a suspension order upon determining the validity of a charge sheet against a public official.

Congress has not always heeded court orders on suspensions, however.

Earlier, the Sandiganbayan also suspended former president Gloria Macapagal-Arroyo as Pampanga Representative following graft and plunder charges against her. But Speaker Feliciano Belmonte Jr said Congress has the last say on this. (READ: Will the House suspend Gloria Arroyo? Here are precedents)

Senate President Franklin Drilon though issued a statement Friday afternoon that the Senate will “fully comply” with the order.

“A senator who is preventively suspended cannot in any manner perform the function of his office within the duration of preventive suspension. He is barred from attending sessions, filing bills, holding committee hearings and signing committee reports,” explained Drilon.

Drilon reiterated that Estrada’s suspension will not affect the work of the Senate. The vice chairman of Estrada’s labor committee, Senator Juan Edgardo “Sonny” Angara, will take over the work of the panel. Estrada also said earlier he asked Senator Pia Cayetano to defend his labor bills while he is detained.

“We will continue to function despite the suspension order. The Senate is not about the senators and it is not about the pork barrel scam controversy. We have a mandate to fulfill and with our performance during the First Regular Session, we have proven that the Senate could not be hampered by any controversy,” Drilon added.

Estrada is charged with plunder and graft in connection with allegations that he, along with 3 senators and other public officials, stole millions from the lawmakers’ Priority Development Assistance Fund (PDAF) through fake projects and bogus non-governmental organizations. The suspected mastermind of the pork barrel scam, Janet Lim Napoles, also faces the same charges and is detained at a police camp in Laguna.

The suspension of public officials charged with plunder is based on Section 5 of the Republic Act 7080, the Philippines’ plunder law. It says a public officer faced with a “valid” charge under the plunder law shall be suspended from public office pending his trial.

The plunder law says, “Any public officer against whom any criminal prosecution under a valid information under this Act in whatever stage of execution and mode of participation, is pending in court, shall be suspended from office.”

If convicted, the public officer will lose all retirement and gratuity benefits under law. If acquitted, the officer will be reinstated and will receive the salaries and benefits he didn’t receive during his suspension. – with a report from Ayee Macaraig/Rappler.com