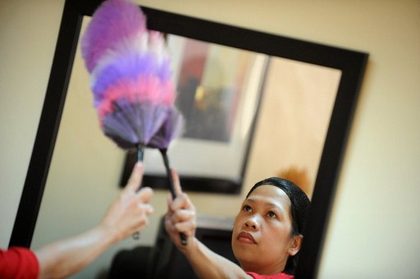 MANILA, Philippines – Filipino lawmakers are hoping to see a 15-year effort to guarantee the rights and benefits of kasambahays or household workers finally sealed into law this year.

Based on data compiled by the Visayas Forum, a non-government organization, below are some facts and figures on domestic help employed in the Philippines and elsewhere:

The Labor Code of the Philippines defines “domestic or household service” as a “service in the employer’s home” that provides convenience and personal comfort to the employer.

Most domestic helpers have multiple duties that include cleaning, laundry, ironing, grocery shopping, cooking, taking care of the children, and driving the members of the household.

Rough estimates of the number of domestic workers in the Philippines range from roughly 600,000 to 2.5 million.

Official data based on the July 2010 Labor Force Survey estimate that there are over 1.8 million private households with employed persons.

According to the Philippine Child Labor Survey, nearly 600,000 child laborers aged 5 to 14 years old are in the service industry and that 373,000 children work in private households.

In the Philippines, the current monthly minimum wage for domestic helpers  is

Under the Labor Code, live-in domestic helpers are also entitled to lodging, food, and medical assistance.
Helpers earning over P1,000 per month must be enrolled in the social security system.

About 35% of local domestic helpers are found in the National Capital Region.

The other top domestic helper employers are in the following regions: Calabarzon (12.1%), Central Visayas (9.8%) and Western Visayas (7.3%).

Most domestic workers in the Phiippines are likely to be from the Visayas regions, Bicol, Southern Tagalog and Northern Mindanao.

Local domestic helpers were recruited primarily through informal methods, including word-of-mouth and referrals.

Overseas domestic workers, mostly female laborers and unskilled, are among the top remitters. They sent home P13 billion in 2007.

One of 3 Filipinos deployed overseas from April to September 2007 were laborers and unskilled workers which include domestic helpers, cleaners and manufacturing laborers. In 2009, over 71,000 Filipinos newly hired as household service workers overseas. Both local and overseas domestic workers face common problems: long working hours with no rest periods, non-payment of wages, verbal, physical and sexual abuse and a lack of adequate accommodation.

Visayan Forum said that they have assisted 510 abused domestic workers per year since 2001. Almost 98% of complainants are female. Usual abuses are physical, verbal, and sexual in nature. Huge number of these cases also involved non-payment of wages and social security.