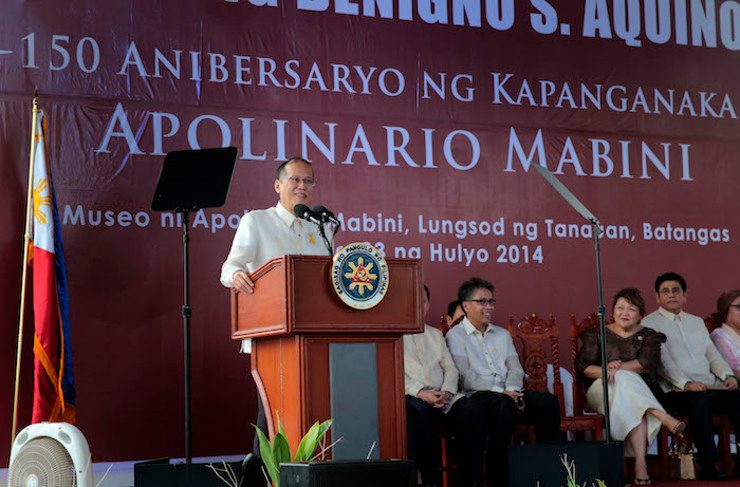 Facebook Twitter Copy URL
Copied
The President cites a request supposedly made by the Supreme Court in 2012 to have P100 million from the justice department transferred to it. SC insiders say this is not true

MANILA, Philippines – President Benigno Aquino III on Wednesday, July 23, again asserted the legality of the Disbursement Acceleration Program and continued to hit the judiciary for committing what he said was a similar fund transfer that it said was unconstitutional.

At Apolinario Mabini’s 150th anniversary rites at the hero’s shrine in Tanauan, Batangas, Aquino said the DAP “was not a haphazard decision” on the part of the executive as it is based on laws, and that even the Supreme Court had “agreed” with such a mechanism.

“We are all the more convinced that DAP is legal because the Supreme Court itself has agreed with this type of mechanism,” he said, and cited instances to support his claim.

Aquino said that in July 2012, the Supreme Court had P1.865 billion ($43.15 million)* in savings, which was earmarked to augment the fund for the construction of the Manila Hall of Justice, and had held a groundbreaking ceremony for the building the following month.

“The problem was that the item in the budget for this project was under the Department of Justice. It is clear then: the Judiciary’s money was earmarked for a project that was supposed to be undertaken by the Executive,” he said.

The President said that in 2012, the DOJ had P100 million ($2.3 million) for the Manila Hall of Justice, and that Malacañang received a letter of request from the Supreme Court to have it transferred to the tribunal. He read a portion of the resolution.

“Wherefore, the court hereby requests the Department of Budget and Management to approve the transfer of the amount of One Hundred Million Pesos which was included in the DOJ-JUSIP for Fiscal Year 2012 budget for the Manila Hall of Justice to the budget of the judiciary, subject to existing policies and procedures, to be used for the construction of the Malabon Hall of Justice,” the resolution read.

Aquino said the Court was “asking us to transfer to them – the judiciary, a separate branch of government – the funds that were supposed to be used in the construction of buildings that will house the courts.”

He said Malacañang saw “nothing wrong with this, since we know that it would only hasten the dispensation of justice in our country.”

Aquino said the Court withdrew its request in December 2013, when the executive was under attack over the DAP.

“However, the Supreme Court withdrew their request in December 2013, when the discussions surrounding DAP had intensified. Even from these examples alone, it is clear that they intended to do a cross-border transfer, or a transfer of funds from one branch of government to another,” he said.

Court insiders told Rappler this is not true, adding the resolution never mentioned any transfer of SC savings to DOJ. Under the arrangement, the SC was supposed to construct the Manila Hall of Justice and that the P1.8 billion stayed with the court, the same insiders said.

“Using common sense alone, why would SC transfer its savings to the executive branch,” one insider familiar with the issue said.

Aquino had been criticized for attacking the Supreme Court on its DAP ruling, with Senator Sergio Osmeña III, his 2010 presidential campaign manager, saying such actions were counterproductive to the administration’s bid to seek a reversal of the court decision. (READ: Serge: Aquino handling of DAP ‘lousy, childish)

Unlike his first public statement on the DAP ruling, the President’s tone at the Mabini anniversary appeared more subdued.

Aquino said the legal basis for DAP is the Administrative Code of 1987, which has not been deemed unconstitutional, and was used by previous administrations.

He added, “Seeing that the Supreme Court itself – the institution with the expertise and the sole mandate to interpret the law – did it as well, we became more confident that our method was correct.”

The President lamented the “clamor and noise” on the DAP issue as these, he said, obscured the “true meanings” of some concepts such as that of good faith.

He said that “good faith” in the context of the law means that “if your actions, whether in the past or present, have a legal basis in existing laws, then you acted in good faith” and that “even if those laws are declared invalid or unconstitutional in the future, it still cannot be said that you acted in bad faith.”

Aquino said the court ruling on DAP seemingly “changed both the rules and this long-established understanding of good faith – and in so doing, brought about serious implications on the work of all those in government.”

“For those in government, if you fulfilled your mandate as prescribed by law, and in accordance with the presumption of regularity, then you have nothing to fear. However, with the recent Supreme Court decision, whenever the actions of any government employee are questioned, this employee now has the obligation to prove that he is innocent of any wrongdoing,” he said.

The President said the “chilling effect” of the ruling is that it “disincentivizes” the executive, which would now have to live in constant fear of being haled to court for every decision it makes.

“Today, because of the Supreme Court decision, each government official must play a guessing game in predicting if his right actions will be considered unconstitutional in the future. Decision making in the executive becomes disincentivized, and with this hesitance comes a delay in the delivery of benefits to the Filipino people. This is the ‘chilling effect’ that the Supreme Court decision will have on government,” Aquino said.

Despite this, the President said his administration is prepared to accept the final ruling of the Supreme Court, which the government had appealed. (READ: Gov’t seeks reversal of DAP ruling)

“When it comes to the law, the Supreme Court has the final word. We have no plans of defying rulings. In truth, we are following not only the primary points in the decision; we are also acting in consideration of all the opinions that accompanied it,” he said.

In response to the President’s speech, SC spokesperson Theodore Te said,  “As the President himself has said in his speech, the matters he discussed are all in the [motion for reconsideration] filed by the government; the SC will address all matters raised in the various MfRs when it renders its resolution on the MfRs.”

The President said, however, that whatever the outcome may be, the people must remember the principles imparted by Apolinario Mabini, among them, that “whatever power held by any leader in any branch of government comes from the people.”

“As the father of our nation, I am obliged to consider the whole – the big picture – at all times, because my decisions on one sector invariably affect others as well. It is likewise my obligation to shed light on this issue, and help our honorable justices understand, especially because their decision has grave implications not only in the executive, judicial, or legislative branch, but also and more importantly on the entire country,” he said.

He added: “It is my obligation to help my Bosses achieve clarity of thought, and impart to them the necessary information, so that all can see what is right and what is just. This is how we choose to follow the example set by Apolinario Mabini – he who said, ‘We are bound by one fate, by the same joys and sorrows, and by common aspirations and interests.”

Before segueing to the DAP issue in his speech, Aquino celebrated the legacy of Mabini, recalling the hero’s principles that Filipinos must strive to emulate, and used these tenets to defend the DAP.

He spoke on 3 principles and ideas that the hero had espoused and lived by: first, that the strength of the state emanates from its citizens; second, public service must promote public interest; and third, public institutions exist for the sake of the people.

Aquino said that in the third principle, Mabini held that “public institutions are established for the sake of the people; thus, it is not right for these very same institutions to obstruct the delivery of benefits to the people.”

“Before the Malolos Congress, Mabini made clear the need for the executive branch to act in a swift, responsive, and sometimes bold manner, precisely because it is tasked with responding to the needs of the people in the soonest possible time,” Aquino said.

He added that a review of history would show “how the tenets held by Mabini resonate with the present,” such as the DAP issue.

Aquino said that only guideline for funds released under the DAP was whether it would benefit the people since “if it would help, why should we oppose an opportunity to hasten the delivery of services to our bosses?”

“Let me point out once more: DAP’s objective was to deliver the benefits due our countrymen in a fast and correct way. Through this policy, we maximized the use of public funds, so that the suffering of our people would not prolong,” he said.

The President again enumerated programs funded under DAP to prove his point, such as P1.6 billion ($37 million) to the Technical Education Skills and Development Authority (Tesda) to train 223,615 technical education graduates or P7,155 ($165.56) per graduate, 146,731 of whom are employed, and the remainder being assisted in seeking jobs.

“All the pertinent details of these graduates – including names, addresses, and contact numbers – are well-documented and open to the public; anyone can freely examine and investigate them,” he said, apparently in response to critics accusing his administration of lack of transparency on the DAP.

He said that of the 202 roads leading to priority tourist destinations in the country, 66 roads worth P5 billion were funded under DAP in 2012, which will have an impact on tourist convenience and the industry as a whole. – Rappler.com