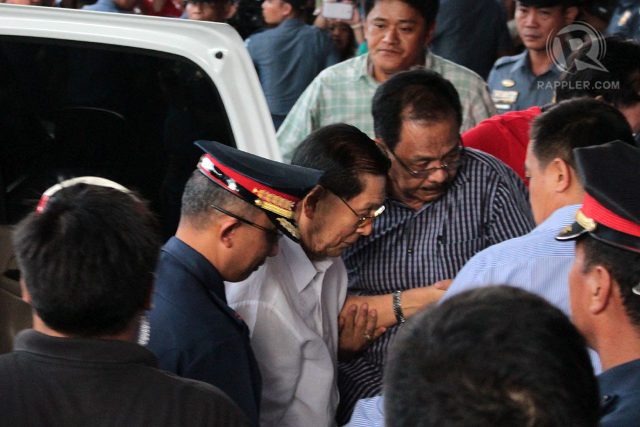 Facebook Twitter Copy URL
Copied
The anti-graft court's suspension order takes effect after the senate president's receipt of the order and for 90 days, unless a motion for reconsideration is filed by Enrile's camp

In a press conference Friday, July 23, 3rd division clerk of court Dennis Pulma said the court granted the prosecution’s motion to suspend Enrile as senator, and also to suspend him from any public office.

The suspension will take effect after the senate president’s receipt of the order and for 90 days after, unless a motion for reconsideration is filed by Enrile’s camp.

In a motion filed Monday, July 14, prosecutors said Enrile’s suspension from office is meant to “preserve the integrity of the prosecution of the accused by preventing him from intimidating or influencing witnesses or tampering [with] documentary evidence, and to avoid further malfeasance while in office.”

Enrile’s lawyer, Estelito Mendoza argued during a hearing Tuesday, July 22, that the suspension of his client is incumbent upon his co-legislators at the Senate and not on the anti-graft court.

In the 19-page resolution penned by Justice Amparo Cabotaje-Tang, the court said its suspension order does not encroach on the power of Congress to discipline its members.

The court explained that the “suspension contemplated in the Constitution is a punitive measure,” while the suspension Enrile now faces is not a penalty but a “preliminary preventive measure.”

Enrile faces plunder and graft charges in connection with the alleged siphoning of his Priority Development Assistance Fund (PDAF) to supposed fictitious projects of fake non-governmental organizations. He is accused of plundering P172 million from his PDAF. – Rappler.com