Roxas to informal settlers: Don’t wait for us to evict you 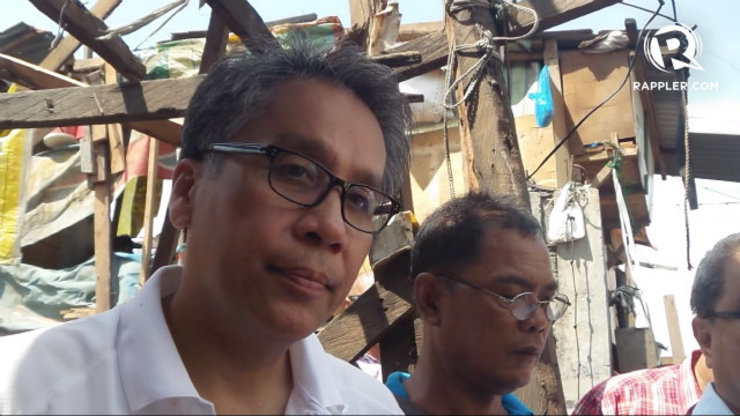 MANILA, Philippines – Secretary Manuel Roxas II of the Department of the Interior and Local Government (DILG) said on Friday, July 25, that his department “may have to use eviction powers” if informal settlers along Metro Manila’s waterways will continue to defy relocation orders.

At least a fourth of informal settler families (ISF) in the danger zones of the National Capital Region (NCR) have been relocated by the government, with over 75,000 more to go.

Despite the huge number of families that have yet to move, Roxas said the relocation program which he heads is still “on track” to fulfill President Benigno Aquino III’s promise during the 2013 State of the Nation Address (SONA) to move to safety these families that obstruct drainage systems in metro region.

(We’re on target, but there’s slippage we can’t avoid because we try, as much as possible, to just convince people to voluntarily leave. The negotiations are unexpectedly prolonged so, if needed, we will use our eviction powers.)

The mass relocation of ISFs is part of the national government’s flood control plan for the NCR. Eight waterways were earlier identified by Public Works Secretary Rogelio Singson as the top priorities for the project. Estero Tripa de Gallinam, home to over 3,887 families, is among the government’s priority.

The Friday event, however, involved only 98 families living within the 3-meter easement of the estero (waterway). The families – on board vans provided for by government – were brought to a relocation site in Barangay Hugo Perez, Trece Martirez City, Cavite.

Roxas explained the program was taking longer than expected because of the steps various departments under the “Oplan Likas” need to take before the actual relocations. Families are informed, taken to the possible relocation sites, and assigned a house before any movement can happen.

The goal, said Roxas, is to move 200 families out of “danger zones” and into relocation sites every week. “Noong simula, talagang mahirap. Hanggang ngayon, merong may katigasan ng ulo,” said Roxas. (At the beginning it was really difficult. Until now, there are some who are stubborn.)

Families moved to relocation sites such as the one in Cavite will be living in houses rent-free for the first year. After that, families will pay P200 per month for 4 years, P300 per month beginning the 5th year, and a maximum of P800 per month on their 30th year.

They will also be given P18,000 in “financial assistance.” Roxas said the houses cost around P290,000 each. The DILG secretary, however, emphasized the non-monetary benefits families will get.

(If you live here, you live in uncertainty. At any time, you can be forced to leave, you’re unsure about the legality, the weather, storm, rains. Compare that to [the sites] where they’ll sleep in tonight.)

Even prior to the SONA, Aquino appointed the DILG and the National Housing Authority (NHA) to spearhead the project. The program has had its detractors.

Malabon Representative Toby Tiangco, spokesman of the opposition United Nationalist Alliance (UNA), said the program was being used to “pump-prime the presidential ambitions of Secretary Roxas.”

Roxas is seen as the ruling Liberal Party’s standard bearer for the 2016 polls, although he has thus far refused to confirm or deny such plans. UNA’s founder, Vice President Jejomar Binay, who defeated Roxas in the 2010 vice presidential elections, is not shy about his 2016 presidential dreams.

(It’s clear that DAP is being used to improve Mar Roxas’ image. He himself has admitted P10 billion from the DAP was allocated to the DILG.)

Roxas did not deny that P10 billion from DAP went to the program but it was released to the NHA.

The Supreme Court has since unanimously declared unconstitutional 3 schemes under the DAP, but Roxas said the court decision would not affect the relocation program since the amount had already been spent.

NHA General Manager Chito Cruz said the funds for the “second batch” of houses for ISFs is already included in next year’s budget.

Opposition Senator Nancy Binay in November 2013 questioned why Roxas was leading the project. Binay’s father, Vice President Binay, is the chairman of the Housing and Urban Development Coordinating Council. – Rappler.com