LOOKING BACK: Aquino’s 2013 SONA in moods 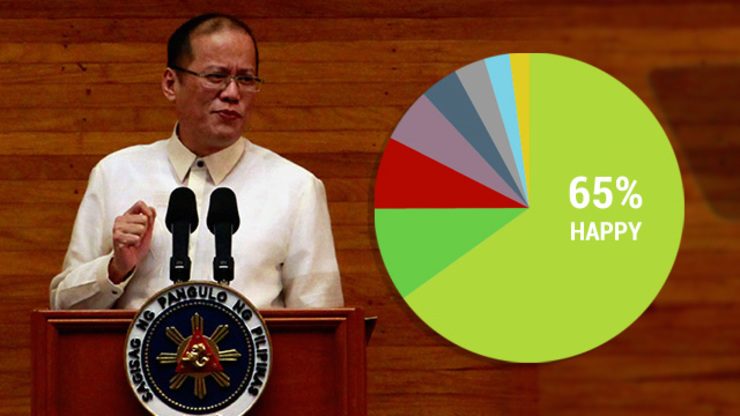 Facebook Twitter Copy URL
Copied
The President got the most number of 'Inspired' votes after his statements on civic responsibility, Jesse Robredo, his vow to go after corrupt policemen, and Tuwid na Daan

MANILA, Philippines – As President Aquino delivered his 4th State of the Nation Address in 2013, people reacted to his speech online through a feature on Rappler’s SONA 2013 microsite. It allowed them to vote for how they felt about each statement the President made.

The President spoke for almost 2 hours, almost entirely in Filipino. During the speech, Rappler noted key statements he made in the “SONA Highlights” section of the microsite. Each highlight had a mood meter which was tied to the mood meter of the story that featured the live stream of the President’s speech.

We tracked votes from 4-7 pm of that day to the mood meter on the story featuring the President’s speech and visualized the data. For the most part, the audience was overwhelmingly happy, with the “Happy” mood garnering as much as 65% of total mood votes for the story.

Over all, the statement that got the most number of mood votes was Aquino’s statement saying he intended to raise rates for the Metro Rail Transit (MRT) and the Light Rail Transit (LRT) closer to the fares of air-conditioned buses, so that the government subsidy for both facilities could be used for other social services.

In that portion of his speech, Aquino alluded to decisions of his predecessor which were “made based on politics.”

“Leaders did everything they could just to keep a firm hold on their power – at the expense of the suffering of present and future generations of Filipinos,” Aquino said. He noted that while the actual cost of one MRT trip was P60, passengers were being asked to pay only P15. In the end, he notet, other taxpayers, including those who were not taking the train, were paying for the remaining P45.

“Whether you live in Mindanao or Visayas, and not once have you ever stepped onto the LRT or MRT, you help to fund this,” he said.

Votes for that statement were predominantly “Happy” (65%). But the statement also got the most number of “Angry” and “Annoyed” votes compared to other statements made by the President that day.

What got people angry

Though “Angry” never dominated the moods for any of the individual statements that Rappler featured in the highlights, when we visualized the data, we noted that there were a number of instances during the speech where “Angry” votes surged.

The first time it did was around the time the President spoke about Hacienda Luisita, a prickly issue that Aquino had to contend with even before he won the presidency.

The next instance was shortly after the President spoke about the need to increase contributions to the Social Security System.

The President got the most number of “Inspired” votes when he appealed to the people to ask themselves how each was contributing to solving the problems of society.

(Government has been fulfilling its obligation to the people, but let us ask ourselves: How have I contributed to the solution? If someone dumps trash into a river, confront them; if you see a building being built obstructing an estuary, report it to the authorities. We will only drown in our problems if we do nothing.)

His tribute to the late Interior and Local government Secretary Jesse Robredo got the second number of “Inspired” votes. But it also triggered a lot of “Sad” votes, with the “Sad” mood getting the 3rd number of votes for that highlight after “Happy” and “Inspired.”

Votes for “Inspired” also surged toward the end of the speech, when the President started talking about “Tuwid na Daan” (Straight Path), his vow to go after the corrupt and win the people’s trust.

“My Bosses,” the President appealed during his speech, “let us remember: where did we begin? If you have doubts now, compare them to the doubts we all carried in 2010.”

He also thanked particular sectors for their role in making change possible through different ways. “This is your SONA,” he said.

After his statements on civic responsibility, Jesse Robredo, and his vow to go after corrupt elements in the police force, Tuwid na Daan and his final statements got the President the most number of “Inspired votes.” – with Dominic Gabriel Go/Rappler.com