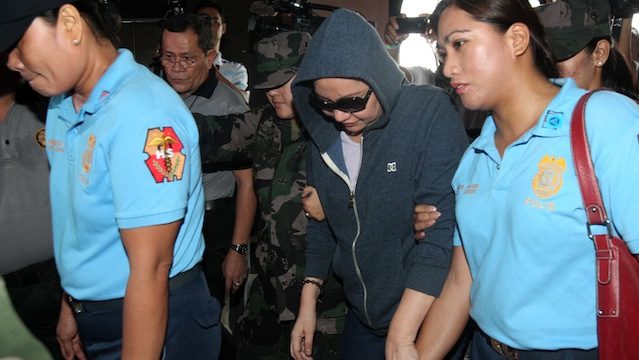 Napoles was picked up by Bureau of Jail Management and Penology personnel at the Fort Sto Domingo in Laguna around 10:40 pm. Escorted by several Philippine National Police units, Napoles arrived at Camp Bagong Diwa in Taguig at around 11:20 pm.

She was then brought to a BJMP facility within the police camp, where she will undergo new booking procedures.

But the PNP and BJMP sat on the order, claiming that it would wait for what the Makati Regional Trial Court, which had committed Napoles to the PNP detention facility in Laguna, had to say about it.

“The Philippine National Police (PNP) has communicated with the Regional Trial Court of Makati, which in turn issued a Comment interposing no objection to the Order of the Sandiganbayan anti-graft court. Hence, the PNP and the BJMP will cause the transfer of Janet Lim Napoles to the BJMP Bicutan facility within the day,” said Roxas in a statement.

Both the PNP and BJMP are under the DILG.

“I have directed the PNP and BJMP involved in her transfer to coordinate and ensure the safety of Ms. Napoles while in transit from Fort Sto. Domingo in Santa Rosa, Laguna to the BJMP facility in Bicutan,” added Roxas.

Napoles faces plunder and graft charges before the Sandiganbayan. – Rappler.com