Congress considers fund to help workers affected by K to 12 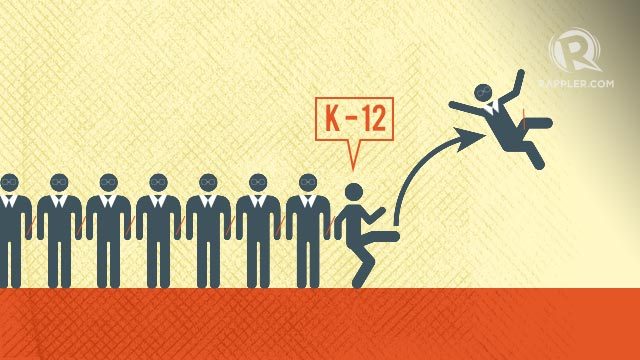 MANILA, Philippines – A House of Representatives committee is asking the Commission on Higher Education (CHED) to report by September the total number of workers in higher education institutions (HEIs) that will be affected by the full implementation of the K to 12 program that starts in 2016.

This is prerequisite before Congress tackles a proposed P29.44-billion ($678,61 million)* transition fund meant to mitigate the impact of the Enhanced Basic Education Act of 2013 on the tertiary education sector.

Pasig City Representative Roman Romulo, chair of the House committee on higher and technical education, revealed this on Tuesday, July 29, during a general assembly organized by the Council of Teachers and Staff of Colleges and Universities in the Philippines, and the University of the Philippines School of Labor and Industrial Relations.

(What we want from them is to be concrete about how many faculty and non-teaching staff will be affected and displaced, and what are the plans of national agencies for those who will be displaced.)

During the assembly which tackled the labor implications of the K to 12 program, more than 200 professors and non-teaching staff from about 40 HEIs expressed fears of losing their jobs once senior high school begins in school year 2016-2017.

Various groups estimate about 30,000 professors will be affected either by retrenchment to prevent losses, redundancy, or early retirement. Even CHED itself admitted there will be displacements  (READ: CBCP: Don’t retrench teachers hit by K to 12)

“By increasing funding for education it will be possible to improve physical learning inputs like classrooms, materials, and salaries at the same time as upgrading intellectual inputs like curricula and teaching methods,” he added.

CHED, which originally proposed only P10 billion for the transition fund, earlier said the fund will cover the cost of maintaining faculty and the cost of lost of enrollment. It will also cushion the impact of redundancy and retrenchment of employees in HEIs.

The House committee also wants CHED to ask colleges and universities to submit their plans for their employees, although the commission admitted they have not yet issued any such order. Romulo said the data on the total number of affected workers can also help in studying other solutions and alternatives, like calls for college professors to teach in senior high school.

(If we want quality education, we need to take care of both student and teacher – the pillars of our education system. But if we offer a lower salary, that’s not fair.)

During the assembly, most of the attendees expressed their dismay over the K to 12 program which, for them, is now a threat to their employment. A quick show of hands indicated most of them want to suspend the program altogether.

But Romulo was among the minority not calling for the suspension.

(I don’t want to call for a suspension. What if the executive department does not approve of it, what if they don’t get a TRO? We don’t have an interim plan for our teachers? We can’t leave them holding an empty bag.)

Senator Antonio “Sonny” Trillanes IV, who was also present during the assembly, is more resolute about the issue, telling a roomful of educators he “will make sure it will be suspended.” (READ: Trillanes on K-to-12: Are we intellectually inferior?)

“I can be very, very passionate about something I believe in. Hindi ko titigilan ito (I won’t stop with this.) Let me just say that I will do everything to make sure this will be suspended,” Trillanes told Rappler.

The senator, who has been against the program “from the very start” said there is still enough time for the suspension of the program. (READ: INFOGRAPHIC: 10 things about K to 12)

For him, the only solution to the impending problems is to retain the present system, improve teacher training, increase teachers’ salaries, build more classrooms and provide more learning materials.

Trillanes also urged school administrators not to continue plans of displacements since there is still a possibility for the program’s suspension. There have been unconfirmed reports that not a few HEIs are already offering early retirement and separation packages to their faculty members before the full implementation of K to 12.

The Department of Labor and Employment, which recently released guidelines for the labor component of the K to 12 program, said it does not expect any displacement before 2016. – Rappler.com