In an e-mail to Rappler, Department of Social Welfare and Development (DSWD) Director Thelsa Biolena said about 3,096 families of Yolanda survivors still live in tents in Region VIII or Eastern Visayas alone.

Eastern Visayas, which includes Tacloban City in Leyte, is the region worst hit by Yolanda that killed more than 6,000 people in November 2013, or nearly 9 months ago.

Government statistics show the average family size in Eastern Visayas is 4.7, which means the families in tents include at least 14,551 individuals.

Biolena, who handles the DSWD’s disaster risk reduction and response operations office, has not provided details on Yolanda survivors in other regions as of posting time.

In April, or 5 months after Yolanda, the DSWD reported that up to 130,000 Yolanda survivors still live in tents.

Many of these homeless survivors had to face another calamity earlier in July – Typhoon Glenda (Rammasun) – which forced up to 2,600 tent dwellers in Tacloban City alone to evacuate. 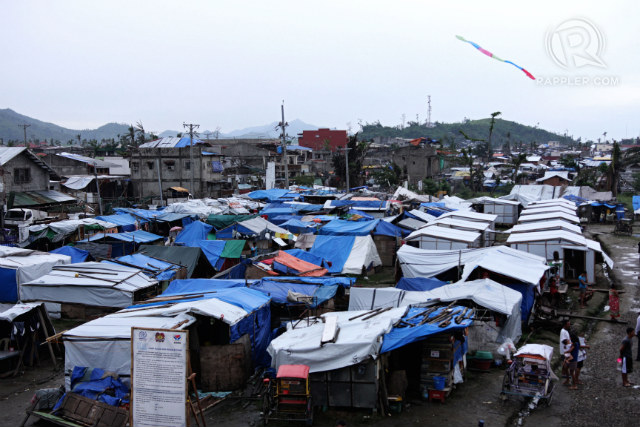 The group Scaling Up Resilience and Governance or Surge – a consortium of international agencies Oxfam, Christian Aid, Handicap International, and Plan International – was alarmed that thousands still live in tents nearly 9 months after Yolanda.

In a statement, Surge said: “These communities are being exposed to tremendous risk and uncertainty. They urgently need to know when permanent relocation will move forward, what other settlement options they have, and what the implications will be for their livelihoods. They must be consulted in ongoing and meaningful ways to ensure any settlement measures represent truly durable solutions.”

(Perhaps everyone can agree that Yolanda left in its wake a massive problem. According to international standards, whenever a calamity of this scale takes place, it normally takes a country one year before it transitions from relief to rehabilitation. However, in just a span of 8 months, the United Nations declared the Philippines to be in the rehabilitation state.)

“Si Ginoong Yuri Afanasiev ng United Nations Development Program na nga po ang nagsabi, and I quote: ‘We have never seen a recovery happen so quickly. And many of us have been in many different disasters,’” the President added.

(In fact, Mr Yuri Afanasiev of the United Nations Development Program said, “We have never seen a recovery happen so quickly. And many of us have been in many different disasters.”) – Rappler.com