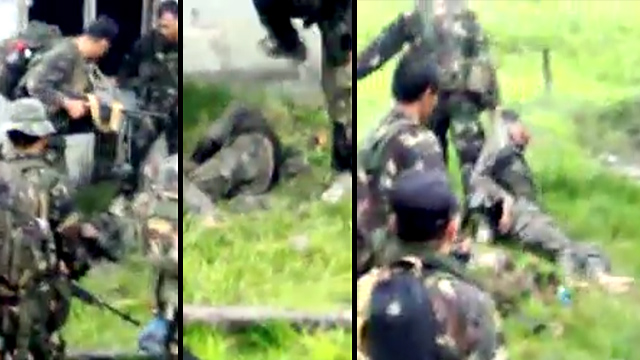 Catapang said abuses will not be tolerated in the military. “My campaign is: “Kawal disiplinado. Bawal abusado. Dapat asintado (Soldiers are disciplined. Abuses are not tolerated. They should be sharpshooters),” he said.

The video was supposedly captured in June.  The military, which is probing the matter, believes the video is several years old, however.

Former Armed Forces chief General Emmanuel Bautista ordered a probe into the video a few weeks before he retired and turned over command to Catapang on July 18.

“We’re having it investigated. Of course, we have to identify where it happened, when it happened, and what unit is involved. Is this really an authentic video? These are the things we are looking into,” Catapang said.

For several decades, the Philippine military has had to battle accusations of human right violations. After the fall of the Marcos dictatorship in 1986, the soldiers were made to undergo human rights training. Human rights has since become part of the military curriculum.

But problems persist in the battlefield, according to various human rights groups.

The Comprehensive Agreement on the Bangsamoro is meant to pave the way for lasting peace especially in MILF-controlled areas in central Mindanao. But this has not been easy, given the presence of the BIFF, the recruitment of international terrorists, and the continued presence of factors that fuel rebellion – poverty and government abuses. – Rappler.com