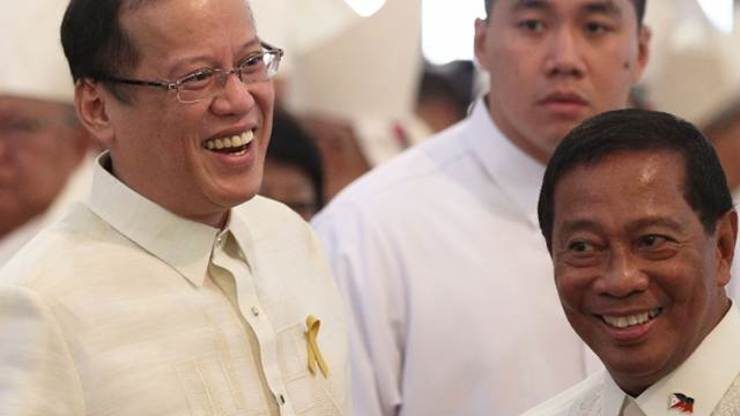 MANILA, Philippines – “The spin masters are having their day.”

Senate President Franklin Drilon flatly denied the statement of Vice President Jejomar Binay that there is “loose talk” that the ruling Liberal Party (LP) is considering adopting him as its standard bearer in the 2016 presidential polls.

A stalwart of the LP, Drilon echoed Interior Secretary Manuel “Mar” Roxas II, LP party president-on-leave, that there is no discussion that the LP might endorse Roxas’ bitter rival in the 2010 vice presidential race.

“There’s no such thing. Honest, I am a member of the executive committee of the LP and there’s been no discussion on that,” Drilon said on ANC’s Headstart on Tuesday, August 5.

He said that “at the end of the day, the party will be influenced by the decision of the President, being the chairman of the party. He would have a very great say as to who the standard bearer will be, where the party is going. At this point, there is no such talk.”

Drilon’s statement comes after Binay said in several interviews that he is open to the possibility of being the administration candidate despite the two coalitions’ rivalry in 2010 and in the 2013 senatorial polls.

Binay said on Monday he received information that the LP is eyeing him as its “adopted” standard bearer in 2016. He made the statement at the sidelines of a commemorative exhibit for the 5th death anniversary of president Corazon Aquino,  keynoted by President Benigno Aquino III.

Binay made the claim exactly a week after the President made special mention of him in his 5th State of the Nation Address, when he recalled the time he was ambushed in 1987 with Binay as his companion. This sparked speculation that the LP chairman might endorse Binay, which Binay’s daughter, Senator Nancy Binay, said was a possibility.

Yet Drilon maintained that the LP is still keen on supporting Roxas even if the Cabinet officials continues to trail Binay in presidential surveys, and drew flak for his handling of various crises under his department.

“We are preparing at this point. If Secretary Mar finally makes his decision, makes public his decision, yes, the party will support him,” Drilon said.

Responding to questions, Drilon said that Roxas has a chance to win the presidency in 2016, even if independent polls show Binay as the runaway winner in the race, if elections were held today.

According to the Pulse Asia Ulat ng Bayan Survey for the period March 19-26, 2014, Binay would be the runaway winner with 40% selecting him as their first choice; Roxas rated 6%.

“Of course, just look back at our recent political history, you will see changes in the fortunes of candidates in a week or a month’s time,” he said.

LP stalwarts have said that Aquino’s endorsement would help Roxas win the 2016 presidency. (READ: Why there’s no giving up on Mar Roxas)

Drilon also said it is the duty of political parties to give voters alternative choices for their next set of leaders.

“The beauty with democracy is that you give people choices. You give the electorate the opportunity to choose who the next leader will be. The people would not forgive us for not presenting to them alternatives which they can choose from,” he said.

Drilon was also asked if the LP is open to having as its 2016 frontrunner an independent candidate such as Senator Grace Poe or Senator Francis Escudero – who both ran under the administration banner in 2013.

To this, he replied: “They ran under the LP-led ticket. But they are not [LP] members. Is the LP open? That is not being discussed this early. It’s extremely difficult to say yes or no at this stage.”

In the March Pulse survey on potential presidential aspirants, neophyte senator Poe was a distant second to Binay with 15%, while Escudero obtained 9%.

Drilon also doused speculation he is considering running for president though he may seek reelection in the Senate.

“At this point, if the people will still give me the mandate I will run for reelection in 2016,” he said. – Rappler.com