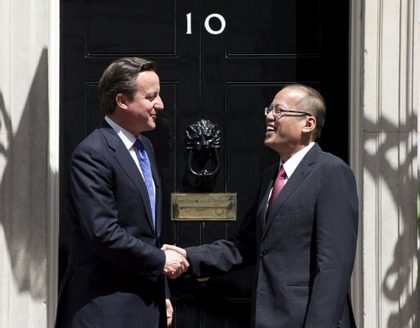 Aquino and his Cabinet met with Cameron in 10 Downing Street on Wednesday, June 6, to discuss a host of issues ranging from politics, economy to cultural exchanges between their two countries.

The 45-minute meeting is part of Aquino’s 3-day official visit to the United Kingdom. Aquino will fly to the US on the same day.

During the meeting, Aquino invited Cameron to be the first incumbent British leader to visit the Philippines. The two leaders also agreed to hold the 3rd round of Philippines-United Kingdom High-Level Talks in London later this year.

Aquino also extended through Cameron the Philippines’ best wishes to Queen Elizabeth II on the occasion of her diamond jubilee.

At the start of the meeting, Aquino thanked Cameron for receiving him and his delegation “at such a very busy time and short notice.”

Cameron quipped, “We’ve had a few celebrations this weekend,” drawing laughter from both sides. Watch the video below:

The joint statement of the two leaders said that “Prime Minister Cameron reiterated the commitment of the United Kingdom to continue assisting in the Mindanao peace process, including through the sharing of lessons learned in the Northern Ireland peace process.”

Aquino also invited the British government to encourage investors to participate in the PPP.

“Cameron noted that the British government had provided, and would continue to provide, expertise to the Philippines in shaping its PPP programme and looked forward to British companies participating in projects.”

The statement also said that the UK welcomed the Philippines’ leading role in the Association of Southeast Asian Nations.

“Both leaders agreed that Asean had a crucial role to play in promoting prosperity and development in Asia, including by working with its partners to resolve regional disputes peacefully.”

Below is the full joint statement of Aquino and Cameron:

BENIGNO AQUINO III OF THE PHILIPPINES

AND PRIME MINISTER DAVID CAMERON OF THE UNITED KINGDOM

ON THE OCCASION OF THE

OFFICIAL VISIT TO THE UNITED KINGDOM OF

2. With the theme “Rising Philippines, Strong Britain: Towards a New Era of Mutual Prosperity and Partnership”, the official visit provided an opportunity to reinvigorate the enduring partnership and productive cooperation between the Philippines and the United Kingdom.

3. At their meeting, President Aquino and Prime Minister Cameron had a broad exchange of views on bilateral, regional and international issues of common interest, as well as on revitalizing and sustaining the relationship towards a prosperous and secure future for both countries.

4. They both recognized that the Philippines and the United Kingdom shared common and universal values of democracy, free speech, and the rule of law, buoyed further by a shared language and growing and deepening links between their two peoples.

5. The two leaders noted the importance of continued interaction between officials at the highest levels of government. They agreed to hold the third round of Philippines-United Kingdom High-Level Talks in London later this year to review the state of the relationship and identify practical cooperation measures towards enhancing the relationship, which will be reflected in the Philippines-United Kingdom Joint Plan of Action (JPA) to be adopted at the meeting.

7. The two leaders welcomed the entry into force of the Philippines-United Kingdom Mutual Legal Assistance Treaty (MLAT). The MLAT, which was signed in London in September 2009, facilitates information-sharing and cooperation in law enforcement and judicial matters to address transnational crime, including money laundering, trafficking of women and children, and illicit drug trafficking. The two leaders expressed the hope that the Philippines-United Kingdom Extradition Treaty would also enter into force soon.

8. The two leaders discussed regional and international issues of mutual interest. Both affirmed the need to collaborate in addressing climate change, combating transnational crime and terrorism, preventing human trafficking and child exploitation, promoting nuclear non-proliferation and disarmament, and maintaining international peace and security. The United Kingdom welcomed the Philippines’ leading role in ASEAN. Both leaders agreed that ASEAN had a crucial role to play in promoting prosperity and development in Asia, including by working with its partners to resolve regional disputes peacefully.

9. President Aquino congratulated the British Government for taking on the co-chairmanship of the Open Government Partnership (OGP) Steering Committee from March to September 2012 and as Lead Chair from September 2012 to August 2013. Both leaders expressed their shared hopes for enhancing the state of governance in order to reduce poverty and foster economic competitiveness.

10. The Philippines and the United Kingdom have enjoyed a robust economic partnership over the years. The United Kingdom is the Philippines’ top European investor, and the largest Philippine tourism market in Europe. President Aquino emphasized that the Philippines offered exciting investment opportunities for British business, especially in energy, infrastructure, business-process outsourcing, information technology, and tourism.

11. The two leaders agreed to further expand economic cooperation to pave the way for increased trade and investment flows between the two countries.

12. President Aquino briefed Prime Minister Cameron on the Philippines’ public-private partnership (PPP) programme. He invited the British government and business sector to continue sharing its vast expertise in this area, and encouraged British investors to participate in the projects. Prime Minister Cameron noted that the British government had provided, and would continue to provide, expertise to the Philippines in shaping its PPP programme and looked forward to British companies participating in projects.

13. President Aquino underscored his government’s determined efforts to ensure a positive, transparent and predictable environment for doing business in the Philippines for foreign investors, including those from the United Kingdom.

14. President Aquino and Prime Minister Cameron affirmed the rich and profound linkages between the Filipino and British peoples. The Filipino diaspora in the United Kingdom, some 250,000 with many employed in the healthcare sector, continue to make positive contributions to the British economy and society. They also recognized the vibrant role played by the 15,000-strong British community in the Philippines in contributing to the country’s economic development and promoting the overall bilateral partnership.

16. President Aquino extended, through Prime Minister Cameron, the best wishes of the Filipino people to Her Majesty the Queen on the occasion of her Diamond Jubilee.

17. The two leaders also looked forward to the Games of the 30th Olympiad to be held in London. President Aquino conveyed his best wishes and support to Prime Minister Cameron for a successful Olympic hosting and that the Philippines looked forward to participating actively in the games.

Invitation to Visit the Philippines