Jun 7, 2012 10:53 AM PHT
Facebook Twitter Copy URL
Copied
President Aquino arrives in the US to meet President Barack Obama. Obama will ask him for updates on his development agenda.

Aquino arrived at the Andrews Air Force Base in Maryland on board a Philippine Airlines flight from London on Wednesday night, June 6, US time.

Aquino will meet with US President Barack Obama on Friday, June 8. It will be their fourth meeting but the first to be held in the White House. 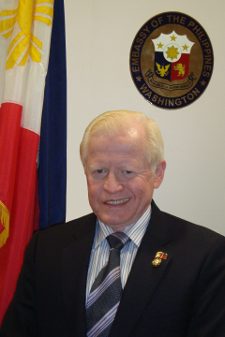 Philippine Ambassador to the US Jose Cuisia said the meeting will lay the groundwork for the US and the Philippines’ strategic, economic, and people-to-people ties. The two will also discuss cooperation in the Asia Pacific as the US refocuses its attention to the area.

“We are happy that a meeting between President Aquino and President Obama is taking place as there is no substitute to strengthening relations between two countries than having a meeting at the summit level.”

Cuisia said Obama expressed interest in being updated on Aquino’s development agenda for the Philippines, specifically efforts to promote inclusive growth, create equal opportunities for all and foster good governance.

The visit comes after Aquino’s three-day trip to the United Kingdom.

Lunch with Hillary, coffee with senators

Cuisia said Aquino will have a full itinerary of activities in Washington, D.C.

He is scheduled to attend a luncheon at the State Department upon the invitation of Secretary Hillary Clinton, who he met during her visit to Manila last year.

Aquino will also meet with leaders of the US Senate at a coffee reception in Capitol Hill:

“The Senators would want to hear about the Aquino administration’s efforts to fight corruption and promote good governance,” said Cuisia. “There will also be discussions on our bilateral economic and defense cooperation, the shift in the focus of the US toward the Asia-Pacific and ways to revitalize our alliance.”

Also on Thursday, Aquino will be the guest of honor at the inaugural dinner of the US-Philippine Society, a private sector initiative to promote trade and investment, and strengthen economic, cultural, technological ties between the two countries.

Before returning to Manila, Aquino will head to Los Angeles to meet members of the Filipino Community at the Hilton Hotel. He will also have the chance to meet with American Idol finalist Jessica Sanchez, who is of Filipino descent. – Rappler.com