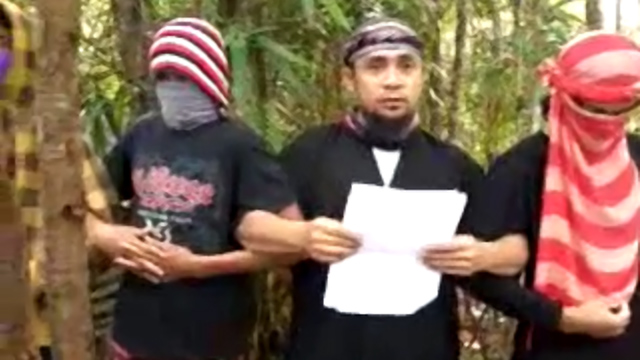 MANILA, Philippines – Hardline Muslim guerrillas in the Philippines said on August 15, Friday, they have pledged allegiance to the Islamic State, the extremist jihadists who now control large swathes of Iraq and Syria.

Clips have been uploaded in recent weeks on the video sharing site YouTube showing both southern Philippines-based Bangsamoro Islamic Freedom Fighters (BIFF) and the Abu Sayyaf rebels pledging support to the Islamic State of Iraq and Syaria (ISIS).

“We have an alliance with the Islamic State and Abu Bakr al-Baghdadi,” BIFF spokesman Abu Misry Mama told Agence France-Presse by telephone on Friday, referring to the brutal jihadist group’s leader. (READ: ISIS threats and followers in the PH)

Misry confirmed that a YouTube video uploaded on Wednesday, showing a purported BIFF leader flanked by armed men reading a statement of support for the ISIS, had come from his group.

Abu Misry, described by the Philippine military as a BIFF spokesman, said his group had no plans to impose the radical ISIS brand of Islam in the Southeast Asian nation.

Beheadings, mass executions and the taking of child brides have marked the ISIS campaign across large parts of Iraq and Syria.

Abu Misry said his group had not sent any fighters from the Philippines to help the ISIS, nor was it recruiting people to join the ISIS.

“But if they need our help, why not?” he added.

Colonel Dickson Hermoso, spokesman for a southern Philippines-based army division, described BIFF as a “terrorist” group engaged in extortion to finance its activities.

“There’s no evidence that Filipino fighters are being sent there (to Syria and Iraq),” Hermoso told Agence France-Presse, while adding that both BIFF and ISIS followed an “extreme” brand of Islam.

A purported Abu Sayyaf video has also been uploaded on Youtube showing one of the group’s most senior leaders, Isnilon Hapilon, mentioning al-Baghdadi as he read out a statement that pledged allegiance to the ISIS.

He was filmed linking arms with more than a dozen men, some with faces swathed in fabric, as they stood at a forest clearing to pray and listen to his statement.
Hapilon carries a $5 million reward on his head by the United States which considers his group a “foreign terror organization” engaged in beheadings, bombings, and kidnappings.

“This is propaganda and we will not give these terrorists the satisfaction by commenting,” Zagala told Agence France-Presse. – Rappler.com