Facebook Twitter Copy URL
Copied
(UPDATED) Makati Mayor Junjun Binay and Senator Nancy Binay challenge Senator Antonio Trillanes to call for a probe into other ‘controversial’ projects in local governments. Trillanes shoots back: Why can’t Senator Binay do it herself?

MANILA, Philippines (UPDATED) – Two days before he is set to face the Senate Blue Ribbon committee over an allegedly overpriced city hall building, Makati Mayor Junjun Binay challenged Senator Antonio Trillanes IV to also call for the investigation of other local government structures, including those that involve his political allies.

Binay and his father Vice President Jejomar Binay have been charged with plunder before the Office of the Ombudsman for the alleged overpricing of a “parking building” in the city.

The building was constructed from 2007 to 2013, when the older Binay was Makati mayor and the younger Binay, city councilor and eventually mayor. Complainants allege the building is overpriced based on numbers from the National Statistics Office (NSO). Binay insists, however, that the NSO data on the cost of buildings are limited.

The Senate is set to begin an investigation on the issue on Wednesday, August 20. The resolution was filed by Trillanes, a member of the Nacionalista Party.

In a Monday, August 18 statement, the younger Binay said Trillanes should also probe reports of “overpriced multi-cab vehicles” in Taguig city and the Iloilo Convention Center.

The Taguig project was paid for by the local government through the Priority Development Assistance Fund (PDAF) of Senator Alan Peter Cayetano while the Iloilo center is funded partially by Senate President Franklin Drilon’s PDAF.

Cayetano is Trillanes’ ally in the NP while Drilon is a leader of the ruling Liberal Party.

Both the Makati mayor and his sister, Senator Nancy Binay made the challenge to Trillanes. “The question is: Can Senator Trillanes file a resolution to investigate Taguig. Senator Alan already admitted may ambisyon siya. May allegation of overpricing. I think it’s up to Senator Trillanes kasi di ko naman advocacy eh; advocacy niya iyan eh,” said Senator Binay in a chance interview with reporters on Monday, August 18.

(Senator Alan has already admitted that he aspires to be president. There are allegations of overpricing. It’s up to Senator Trillanes because that isn’t my advocacy, that’s his.)

Senator Binay said the Iloilo project could be probed as well.

Reacting to Senator Binay’s statement, Trillanes told reporters: “Ang sa akin, siya ay senador din. Baka bakante naman ang oras niya. She can file that resolution herself. Tayo ay hindi natin napag-aralan iyon. Ngayon we are busy with [Makati] so kung napag-aralan niya at may dokumento siya, she can file it. She was elected senator. She can do that,” said Trillanes.

(As far as I’m concerned, she’s a senator too. Maybe she can find the time….She can file that resolution herself. I won’t study [the other projects] because we’re now busy with the Makati issue so if she has already studied the other cases and has the documents to back it up, she can file it.)

Using the NSO’s data, Binay turned the tables around and said the Iloilo project, which is estimated to cost between P700 million to P1 billion (US$600 to US$22.9 million), may turn out to be an even more expensive structure than the allegedly overpriced Makati building.

“The cost of the Iloilo Convention Center, based on the Senate report, is P700,000,000. But if you use the NSO data, the cost should only be P86,265,600. So if you use the argument of Renato Bondal which appears be supported by Senator Trillanes, then the Iloilo Convention Center is overpriced by P613,734,400. Are they now saying the NSO data is correct only as far as Makati is concerned?” said Binay in the statement.

Bondal ran against Binay during the 2013 polls but lost. He is also one of the complainants in the plunder case. 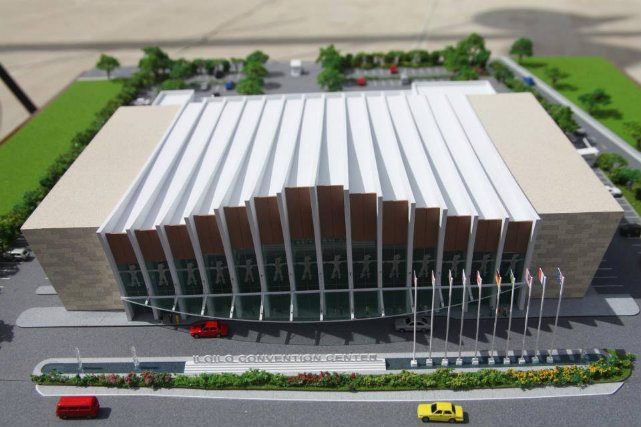 The convention center and the controversial Makati building have the same contractor, Hillmarc’s Construction Corporation.

In a text message, Drilon downplayed Binay’s calls to probe the Iloilo project. “It’s like comparing apples to oranges. What we are building in Iloilo is a state-of-the-art international convention center in preparation for the Asia-Pacific Economic Cooperation meeting in 2015. What was built in Makati was supposed to be a plain parking building” he said.

Drilon added the Public Works department headed by Secretary Rogelio Singson conducted the bidding for the building and that all documents could be checked at any time.

The Binays have claimed the charges against them are baseless and are an “organized demolition campaign” against the vice president, who is not shy about his presidential plans. The older Binay currently leads presidential hopefuls in surveys.

“Senator Cayetano has declared his intention to run for president. Since Senator Trillanes has admitted he wants my father probed because he is a candidate for president, then I suggest the good senator also probe his partymate to show that he is fair,” said the younger Binay in the statement.

In a chance interview with reporters on Monday, Senator Binay said she would not be asking questions during the hearing, lest she be accused of “lawyering” for her father and brother.

(It won’t look good if I ask the complainants questions. It’ll look as though I’m using my position to make my brother look good. He can answer the allegations. It just pains me because there are more important things than this issue but if they want to talk about it then it’s okay.)

Despite the Binays’ qualms, the hearing will push through as planned on Wednesday, August 20. Senator Koko Pimentel told reporters on Monday the committee would be inviting Mayor Binay, the Makati vice mayor, a representative from the NSO, representatives of the construction industry, and a Bureau of Local Government Finance official.

Commission on Audit auditors assigned to check the project will also be asked to appear before the Senate. Pimentel, who will lead the probe, promised he would be fair and objective despite differences with the Vice President.

The Vice President himself may be invited but will not be compelled to attend the hearing. Binay earlier said the probe was not “in aid of legislation” but in “aid of someone’s political ambition.”

The Makati mayor said the probe was unnecessary and a “waste of taxpayer’s money” since a case has already been filed before the Ombudsman.

Pimentel denied the claim. “In aid of legislation aspect, that will be my approach… If there is someone who should be charged but has not been charged then we will make a recommendation to include that person. So there’s still value to the hearing as far as the administrative, criminal case pending in the Ombudsman,” Pimentel told reporters.

The senator also called on the Makati mayor to “respect the senators’ decision to investigate” the issue.

“When his time comes as senator, and a similar reso is filed, then he should vote against investigating it but that’s when his time comes. ‘Pag naging senador na siya (But only when he becomes senator),” added Pimentel. – with reports from Ayee Macaraig/Rappler.com