Jun 8, 2012 6:04 PM PHT
Facebook Twitter Copy URL
Copied
Raul Pangalangan will try for the third time to get into the Supreme Court 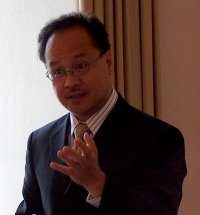 MANILA, Philippines – A former University of the Philippines law dean has accepted his nomination to the highest judicial post in the country.

This is not the first time that Pangalangan will vie for a seat in the Supreme Court. He was shortlisted for the post of associate justice at the start of President Aquino’s administration as well as during the time of former President Gloria Arroyo.

A certain Jocelyn Esquivel, who is both a teacher and a nurse but not a lawyer, also applied for the post. Other names that were floated as possible nominees include former assistant prosecutor Marianito Sasodoncillo and retired Judge Manuel Siayngco Jr.

Applications and nominations may be submitted to the JBC until June 18.

Aquino has until August 29 to choose Corona’s replacement. Corona was found guilty of violating the Constitution by the Senate impeachment court on May 29 after he failed to disclose P183 million in peso and dollar bank accounts in his statement of assets, liabilities and net worth. – Rappler.com