Aug 20, 2014 12:22 PM PHT
Ayee Macaraig
Facebook Twitter Copy URL
Copied
Some senators question the relevance of the Makati government's 'birthday cake' issue in its hearings on the controversial building, though at least one senator believes it's a valid point 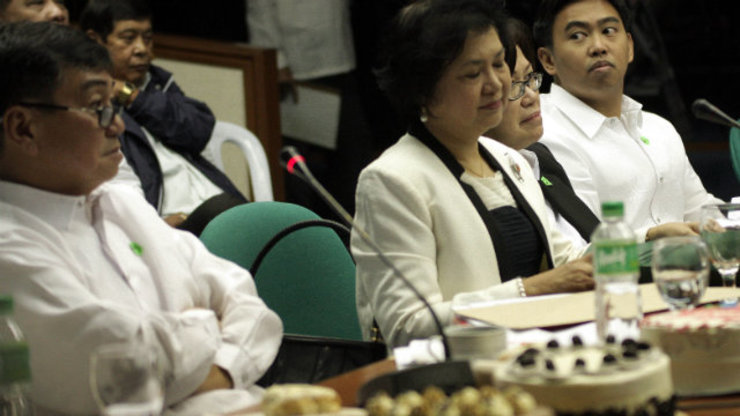 MANILA, Philippines – A Senate blue ribbon committee investigation included the presentation of a Red Ribbon cake which a lawyer brought out as alleged proof of the “thievery” of the Binay dynasty in Makati.

At a Senate hearing on Wednesday, August 20, lawyer Renato Bondal accused Vice President Jejomar Binay and his son, Makati Mayor Jejomar Erwin “Junjun” Binay Jr, of grossly overpricing not just a supposed “parking building” but other buildings of the city government, and even the birthday cakes Makati gives to senior citizens.

The Senate hearing on the controversial Makati City Hall Building 2 took a different twist when Bondal presented assorted cakes to argue how the Binays allegedly overprice facilities and services and hide the actual price from citizens like himself.

Senator Aquilino “Koko” Pimentel III, who is presiding over the investigation, noted that the allegation on the overpriced cakes was not included in the agenda stated in a Senate resolution, along with other buildings Bondal pointed out in his Powerpoint presentation.

Yet Senator Antonio Trillanes IV of the Nacionalista Party (NP), who asked follow-up questions during Bondal’s presentation, responded that the allegedly overpriced cakes were a valid point of investigation.

“Bondal is just proving his point that in Makati, hindi lang building ang pinagkakakitaan kundi pati ang cake (It’s not just buildings they earn from but even cakes).”

In his opening statement, Bondal used colorful language to accuse the Vice President, his son, and their allies in the city council of overpricing the alleged parking building by P2 billion ($45.65 million).

(The building was overpriced by P2 billion – the amount from the people of Makati that they used for the building from 2007 to 2013. The nation must know the Binays’ system of stealing in Makati. This is what the country will have to suffer if Vice President Binay wins as president. It’s only his family whose lives are improving, not ours.)

Bondal also accused the Binays of violating the Government Procurement Act by splitting the project into 5 contracts. He called Makati “the chop-chop capital of the Philippines.”

(The Binays are splitting the contracts. There is really no bidding with a true value. We will only know the true value when the project is finished. Splitting contracts is strictly prohibited. You cannot chop it. All buildings are “chopped.”)

The Senate blue ribbon committee is investigating the building allegedly overpriced by at least P1.9 billion ($43 million). The Senate resolution of Trillanes is based on the plunder and graft complaint Bondal and Nicolas “Ching” Enciso VI filed against the Binays before the Ombudsman.

Initially a candidate of the NP who eventually ran as an independent in 2013, Bondal ran against Mayor Binay in the mayoral polls but lost.

Beyond the building, Trillanes moved to expand the coverage of the investigation to include the cakes and other buildings Bondal claimed the Binays had overpriced.

Trillanes moved to summon the documents on the other buildings. Mayor Binay promised to submit the files.

Opposition senators JV Ejercito, Vicente Sotto III and even Senate President Franklin Drilon requested Bondal to “stick to the facts” and to be careful in his word choice.

“If possible, please don’t use descriptive words. Let’s admit this is a politically charged inquiry. People might say we are politicking here,” Drilon said.

Yet Trillanes argued that Bondal must be given “latitude.” “He’s indignant because they are the ones who felt, saw this. They are from Makati. This is the first time they air out their sentiments.”

Tan: No COA clearance yet

In his opening statement, Mayor Binay reiterated his previous argument that data from the National Statistics Office (NSO) are not sufficient basis to compare the prices of the Makati building to other high-rise buildings in the city like the Shang Grand Tower and The Residences at Greenbelt.

He too went off topic, going into the “reforms” his father instituted as mayor that led to various awards for the city government.

“Makati sustained investor confidence because of reforms we put in place since time of my father. My father cut down the time for approving licenses. This makes our award significant considering baseless accusations against us.”

Binay again cited a Commission on Audit (COA) memorandum saying the price of the building was “reasonable.”

Yet COA chairperson Grace Pulido-Tan clarified that the memo was just an “internal communication” that is still under review.

“We do not give clearances like that,” Tan said.

Vice President Binay had earlier defended the construction of the building, which began while he was Makati mayor in 2007, and compared the building allegedly worth P1.56 billion ($36.05 million) with the construction of a house and the printing of T-shirts. (READ: Binay: Building just ‘high quality,’ not overpriced) – Rappler.com