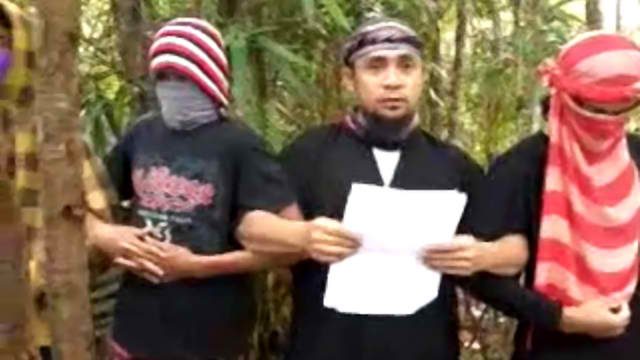 “The report that has been reaching some of us who are retired people who are knowledgable about Mindanao is that at least 100 of our young Filipino Muslims have already somehow infiltrated into Iraq to undergo training so they can come back [as] jihadists,” Ramos told ABS-CBN host Lynda Jumilla on Tuesday night, August 19, in her program Beyond Politics.

The Islamic State, formerly Islamic State of Iraq and Syria (ISIS), is the “latest reincarnation of fighters from at least 2 al-Qaeda-linked groups that had become so brutal that, at one point, al-Qaeda’s leader Ayman al-Zawahiri distanced al-Qaeda from them,” Rappler executive editor Maria Ressa described the group in an earlier report.

It has taken control of various villages in Syria and is moving to capture more, prompting Washington to carry out air strikes against the extremist group in Iraq. To retaliate, the jihadists on Wednesday, August 20, claimed they beheaded a US journalist.

The Philipine military said the information shared by the former president has not been verified but it continues to be vigilant about the reports.

“We don’t have any confirmatory report on that. It came out in the media several months ago. Local jihadists in the country moral support to ISIS and a small group of Isnilon Hapilon recently took the oath of support to ISIS,” said Major General Eduardo Año, chief of the Intelligence Service of the Armed Forces of the Philippines (ISAFP).

Ramos recalled how Abu Sayyaf founders Abdurajak Janjalani and brother Khadaffy Janjalani joined a group of about 90 Filipino Muslims who were trained in the Afghan war. They returned to the Philippines and formed the Abu Sayyaf Group.

Today, Ramos said the Abu Sayyaf group is “being encouraged by the success of the ISIS and ISIL in Iraq.” He echoed concerns of terrorism experts that returning jihadists would reinvigorate local radicals again.

A video of senior Abu Sayyaf leader Isnilon Hapilon circulated a few weeks ago showing him and several masked men swearing their oath to the ISIS.

“We pledge to obey him on anything which our hearts desire or not and to value him more than anyone else….We will not take any emir other than him unless we see in him any obvious act of disbelief that could be questioned by Allah in the hereafter,” Hapilon said in Tausug.

Prospects of peace in Mindanao

Hapilon’s video is one of several other instances of Filipino support on social media for ISIS but the Philippine military had downplayed it.

Año said it is a case of the Abu Sayyaf giving “moral support” to the jihadist group and not the other way around.

He said it’s a different story if ISIS sends physical forces, additional manpower, financial support or bomb components to the Philippines, which he said is not the case.

The Abu Sayyaf previously joined the Black Flag Movement to symbolize its support for Al Qaeda and the Indonesia-based Jema’ah Islamiyah. These are detailed in Ressa’s book, From Bin Laden to Facebook.

But Año said the local terrorist group has not received financial support for a long time, forcing them to focus on kidnapping. The video, he said, may be a ploy to get financial backing. (Read: Al-Qaeda’s black flag seized in ASG camp)

Military has stepped up operations against the Abu Sayyaf – said to be around 400. Año said there is an ongoing manhunt for Hapilon who was supposedly last spotted in Basilan in July.