Between ‘Million’ and today: ‘Pork system still in place’

Aug 25, 2014 1:25 PM PHT
Bea Cupin
Facebook Twitter Copy URL
Copied
'Nothing has changed from last year,' according to anti-pork barrel advocates. They are gathering 6 million signatures to force Congress to pass a law banning all types of discretionary funds. 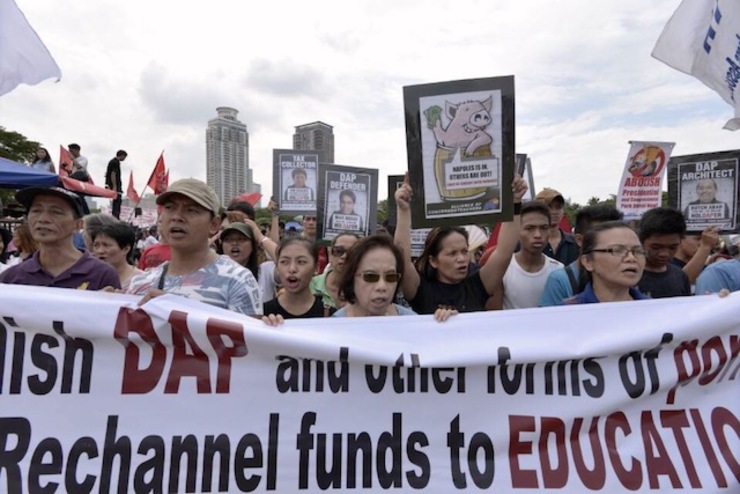 MANILA, Philippines – It was not the first time 59-year-old Lolita Agala from Navotas went to Luneta Park on National Heroes’ Day.

Around this time in 2013, she was was one of thousands who joined the “Million People March” to call on government to abolish the pork barrel system and to make the guilty pay.

On Monday, August 25, Agala again sat under the scorching sun, this time as part of the #ScrapPork rally and the people’s initiative, which both aim to eradicate all forms of pork in the government budget system.

Although the crowd was much less than last year’s hundreds of thousands, the 2014 iteration of the anti-pork rally was just as colorful and diverse, featuring different groups and individuals, some of whom make for strange bedfellows.

Students and teachers groups also asked for a bigger chunk of the government’s budget for the education sector, while some militant groups went further and asked for the President’s ouster. One group called the “United Makati Against Corruption” likewise staged a protest against Vice President Jejomar Binay and his son Makati Mayor Junjun Binay, accusing them of plunder.

Jay Contreras, from the popular Filipino band Kamikazee, elicited the loudest reactions from students in the crowd. In between hit songs, Contreras encouraged the young crowd to do something.

“Gawin natin ito para sa mga bata,” he said. (Let’s do this for the children.)

A lot has happened since the first huge protest against the Aquino administration in 2013. A few days after the Million People March was staged, alleged mastermind Janet Lim Napoles surrendered to the President.

But former Bayan Muna Representative Teddy Casiño said the SC’s decisions didn’t exactly translate into change. “Most of the groups felt that despite the Supreme Court ruling against presidential and congressional pork, the system is still in place,” said the former lawmaker. 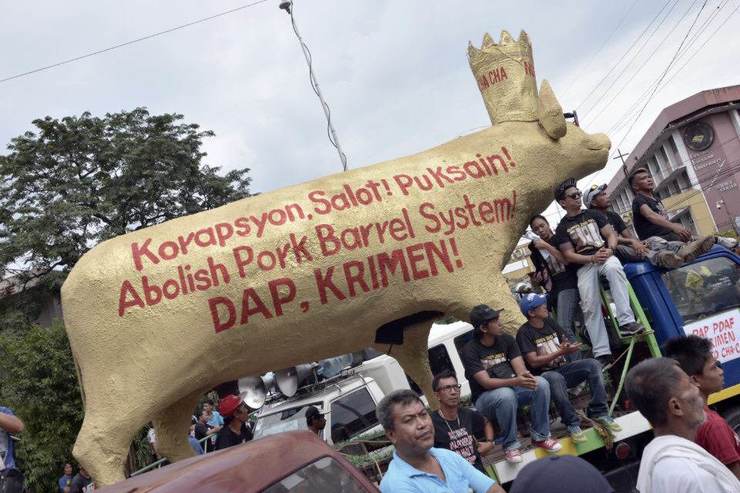 In a statement, the People’s Initiative Against Pork Barrel said that despite the SC’s decision on PDAF, the system still prevails. “Congress has created a new mechanism for handing out pork to its members via a discreet referral and recommendation system,” the group said in a statement.

According to the group, the SC decision only dealt with one discretionary fund of the President. It “kept intact the President’s gargantuan pork barrel funds, including the P132-billion Malampaya fund, the President’s Social Fund, and the P449 billion Special Purpose Fund.”

That’s why the People’s Initiative Against Pork wants to a law passed banning all kinds of pork barrel-type of allocations. They want to force Congress to act on the measure by using the mode provided under Republic Act 6735 or the The Initiative and Referendum Act. The move will require at least 6 million signatures, with representation from all political districts in the Philippines. (READ: CBCP backs people’s initiative vs pork barrel)

Part of the group’s initiative is a proposed bill that would “abolish the presidential and congressional pork barrel; prohibit lump sum, discretionary appropriations; and penalize violators.”

The initiative was launched in Cebu on Saturday, August 23, and the rally in Luneta part is only the first of its kind, said Casiño. (Read a summary of the “People’s Initiative Bill” here)

Ina Vergara, Central Student Council president of the University of Santo Tomas, said they too plan on opening up a booth inside campus for the People’s Initiative.

(It’s been a year since Aquino promised to abolish the pork barrel system but until now, nothing’s changed.)

“In this act, we empower ordinary people to do extraordinary things,” she added.

For Agala, the PDAF, DAP and the supposed “work arounds” mean empty stomachs and an uncertain future.