MANILA, Philippines – Why is the primary agency tasked to “serve and protect” the country from criminals set to be “underfunded” in 2015?

This is the question lawmakers asked Interior Secretary Manuel Roxas II and Philippine National Police (PNP) chief Director General Alan Purisima on Wednesday, August 27, during the House hearing on the proposed 2015 budget of the Department of the Interior and Local Government (DILG).

But Roxas defended the proposed 2015 budget, adding that it would not affect the PNP’s performance.

“Maaaring bumaba sa PNP (The PNP’s budget may have gone down) but I don’t think it’s detrimental at this stage,” he told the House appropriations committee.

Roxas explained that PNP expenses in 2013 ballooned due to several unforeseen events, such as the Typhoon Yolanda (Haiyan) which ravaged Eastern Visayas and nearby areas. The Zamboanga siege and the Bohol quake had also inflated the PNP’s actual expenses for that year.

Roxas told lawmakers the PNP’s allocation is actually up by P2 billion ($45.8 million) in 2015 but this was not reflected because the money is allocated for recruits. The fund, he said, will remain in the PNP’s Miscellaneous Personnel Benefit Fund until the hires new policemen.

Roxas admitted the PNP could use more funds, and said Congress can appropriate more if they deemed it necessary.

During the hearing, Roxas said the PNP needs to recruit at least 80,000 cops to address police visibility issues. The PNP had earlier admitted that its 148,000-strong force is not enough.

DILG Undersecretary Austere Panadero told the committee the department wants to recruit at least 13,000 new cops in 2015. Typically, the police force is authorized to hire 10,000 more troops every year but while the funds are there, recruitment isn’t always easy.

From offices to the streets

“We have openings for many PO1s but we have difficulty finding people, especially when it comes to meeting qualifications,” said Roxas.

Purisima said that while the PNP currently has 13,000 authorized positions, only 1,000 new cops are set to take their oath. Another 10,000 applications are still being processed by the PNP, he added.

Purisima explained that since the budget is available only in January, the actual recruitment process begins more than halfway through the year, or in July. It gives the PNP only 6 months to screen and process would-be cops.

“Recruitment should be year-long so we can attract more graduates. The proposal is for recruitment to be year-long. We’re also proposing to set up an office devoted to recruitment,” he said.

Police visibility is among the 2013 State of the Nation (SONA) promises of President Benigno Aquino III. The goal then was to move 30,000 cops from administrative jobs to the field. 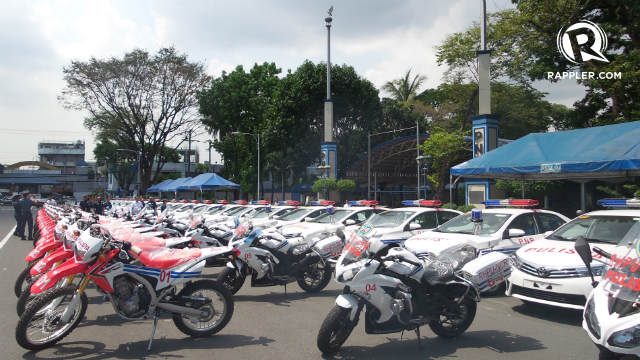 The PNP, along with other uniformed services, are set for upgrades in 2014. The Bureau of Jail Management and Penology (BJMP) and the Bureau of Fire Protection (BFP) are also under the DILG.

In his opening statement, Panadero said 18 new police stations will be constructed in 2015. The BFP will also have 45 new stations and acquire more firetrucks. The BJMP, meanwhile, will construct 22 structures and 6 jail buildings.

The PNP’s biggest upgrade, the operational transformation program, was supposed to be funded  under the government’s controversial Disbursement Acceleration Program (DAP).

But since the Supreme Court (SC) declared 3 schemes under the DAP unconstitutional, Roxas said they would bid out half of the planned new patrol cars. The government has since asked the SC to reconsider its unanimous decision on the DAP.

In contrast to the PNP’s “decreased” budget, the DILG’s Office of the Secretary is asking for a 56.2%-increase in funding. The DILG’s proposed 2015 budget is the fourth highest among all departments, and is 4% higher than its current budget.

Roxas defended the increase, saying most of it is allocated for the government’s Grassroots Participatory Budgeting Process (GPBP), a “bottom up” approach to budget allocation.

The DILG will also give “continuous assistance” to LGUs affected by Yolanda and those it by 2014’s Typhoon Glenda (Rammasun). – Rappler.com