Aug 29, 2014 12:43 AM PHT
Carmela Fonbuena
Facebook Twitter Copy URL
Copied
'They did not surrender their firearms as they may in turn be held hostage themselves,' says Philippine military spokesperson Lieutenant Colonel Ramon Zagala MANILA, Philippines (Update 4) – Syrian rebels surrounded encampments of Filipino peacekeepers in Golan Heights on Thursday, August 28, demanding them to surrender their firearms. The refusal of the Filipino troops resulted in a standoff that is ongoing as of this posting.

At least 81 Filipino troops under the United Nations Disengagement Force (UNDOF) are involved, according to UN spokesperson Stephane Dujarric.

The same group of rebels had earlier taken hostage 43 peacekeepers from Fiji after they agreed to surrender their firearms. The Fijians were in tow when the Syrian rebels surrounded the Filipino peacekeepers.

The Philippines is working closely with the UN to ensure safety of the troops, according to military spokesperson Lieutenant Colonel Ramon Zagala.

“The Philippine peacekeepers held their ground and demonstrated their resolve to defend their positions. They did not surrender their firearms as they may in turn be held hostage themselves. This resulted in a stand-off which is still the prevailing situation at this time as UN officials try to peacefully resolve the situation,” Zagala said in a statement released midnight in the Philippines Friday.

“We will not give in,” Zagala added.

The UN Security Council is demanding  the “unconditional and immediate release of all the detained United Nations peacekeepers and called upon all parties to cooperate with UNDOF in good faith to enable it to operate freely and to ensure full security of its personnel,” the council said in a statement. 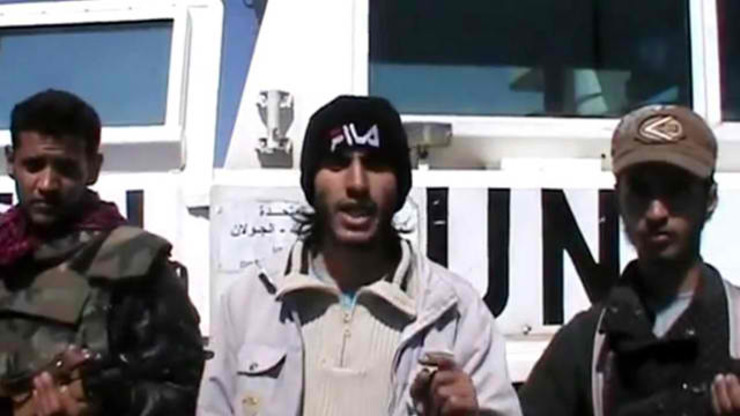 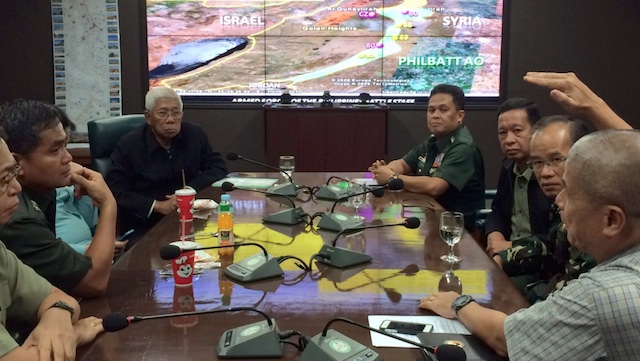 The incident happens as the Philippines is finalizing the pullout of over 300 Filipino peacekeepers in Golan Heights because of the escalating security risk in the region. Their tour of duty is ending in October and no fresh troops will be deployed.

This new incident is different, however. The rebels trooped to their encampments.

In 2009, the Philippines started to deploy peacekeepers to Golan, which straddles the borders of warring Syria and Israel. The task of the peacekeepers is to “maintain the ceasefire and supervise the agreement and protocol with regard to the area of separation and area of limitation.”

No military forces except the UN peacekeepers are allowed in the area of separation. The Philippines is one of 6 troop-contributing countries. The others are Fiji, India, Ireland, Nepal, and Netherlands.

The situation has changed when the internal conflict in Syria erupted in 2011, however. The Philippines already considered pulling out its Golan peacekeepers after the kidnapping incidents last year but was convinced by the UN to stay inspite of continued withdrawal of countries like Australia, Croatian and Japan.

Escalating internal violence prompted the new decision to pull out.

The UN Security Council has condemned the “increased use by elements of the Syrian opposition and other groups of improvised explosive devices in the UNDOF area of operation.”

Several mortars landed in or near UN positions during fighting on Wednesday, the UN spokesman said. – Rappler.com