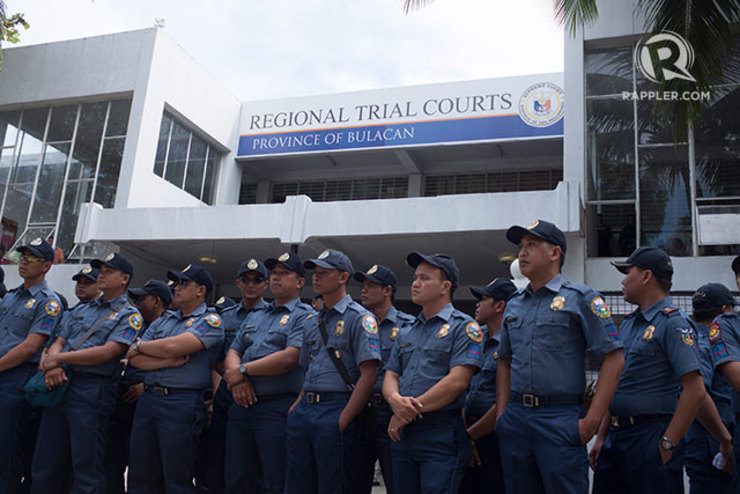 The motion, for filing Monday, September 1, asks the court to transfer Palparan either to the Philippine Army Custodial Center (PACC) in Fort Bonifacio or at the detention center of the Intelligence Agency of the Armed Forces of the Philippines (ISAFP) in Camp Aguinaldo.

Two of the four accused in the case, Lt. Col. Felipe Anotado and S/Sgt Edgar Osorio, both Army personnel, are detained at the custodial center.

The prosecution earlier maintained that Palparan’s status as a retired general bans him from being allowed into the AFP’s custody.

Palparan, along with 3 others, is charged with the 2006 kidnapping and serious illegal detention of University of the Philippines (UP) students Karen Empeno and Sherlyn Cadapan. Witnesses claim the young women were tortured, raped and held under the orders of the former partylist representative.

Malolos Regional Trial Court Branch 14 Judge Teodora Gonzales asked the defense to file the motion within the day for comment from the prosecution counsel as well as the proposed institutions for detention.

The National Union of People’s Lawyers (NUPL) labeled the move as “detention-shopping.”

“Palparan detention-shopping as if going on holiday. The audacity to make flippant choices betrays the desire to come home to a conniving AFP,” the group said on Twitter. About two dozen officers in the blue uniforms of the Philippine National Police (PNP) stood guard before the steps of the Regional Trial Court. Several others were stationed at the second floor outside branch 14.

A dozen jail guards also appeared with the retired general, 8 of them inside the courtroom, blocking Palparan from the view of the rest of the court. The NBI also had their representatives armed with a variety of automatic weapons.

Palparan had earlier claimed that detention at the Bulacan Provincial Jail would put his life in jeopardy.

Between 2005 and 2006, under the Arroyo administration, Palparan served as commanding general of the military’s 7th infantry division, which commanded troops in central Luzon, including Bulacan, once the hotbed of communist insurgency.

Under the Arroyo government, it was the subject of a massive campaign by the Philippine military to weed out the mass supporters of the rebel New People’s Army (NPA).

Activists with megaphones led protests outside the trial court during the hearing. To one side were the families of Palparan’s alleged victims as well as members of progressive groups carrying posters with the faces of the dead and missing. Opposite them were a group of at least thirty Palparan supporters, many of them widows of soldiers killed in alleged NPA ambushes.

Both sides attempted to outshout the other. “Butcher Palparan,” screamed one side. “Free Palparan,” shouted the other. It is a change from Palparan’s previous hearing, when Palparan’s supporters were content to stand quietly. Myra Ochave, the 60-year-old widow of soldier Richard Ochave, says her husband was killed in the Mountain Province by the NPA in an ambush against the 24th Infantry Battalion.

“It is not true (that the two women were kidnapped). All the left wants to do is to jail all the generals so they can be free to do what they want,” said Ochave in Filipino.

She said that Richard’s death in 1991 has never been brought to justice. A pension of PHP 7,000 (159 USD) is not enough to compensate for her husband’s lost.

The retired general will appear again in court next Monday, September 8. – Rappler.com