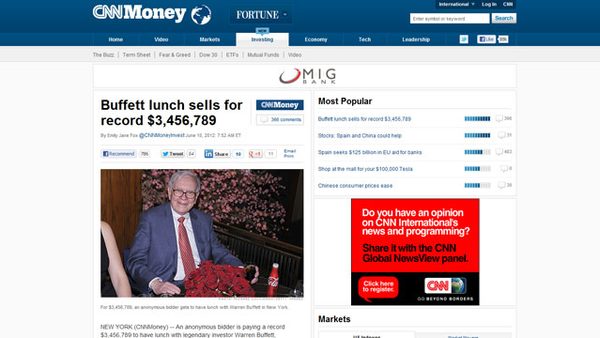 A record US$3,456,789 bid from an anonymous person bested well-heeled ones who were vying for the chance to eat lunch with legendary investor Warren Buffett. Glide, the San Francisco Bay anti-poverty organization, announced this after a week-long auction on Ebay. The 2012 winning bid topped by over $800,000 the 2011 record bid of $2,626,411 to dine with the “Oracle of Omaha.” Over the last decade, Buffett has raised more than $11.5 million (excluding the 2012 auction) for Glide. The chairman and chief executive of Berkshire Hathaway will join the auction winner and 7 friends for lunch at the Smith & Wollensky steakhouse in New York.