Facebook Twitter Copy URL
Copied
(UPDATED) 'As of today...we can still claim that the Philippines is MERS-CoV free,' says Health Secretary Enrique Ona, as the health department awaits the new test results of the nurse

Health Secretary Enrique Ona said in a press briefing Wednesday that two female nurses from Dammam, Saudi Arabia, arrived in the Philippines via a Saudi Airlines flight on Friday, August 29.

Health authorities from Saudi Arabia conducted a health check on the two nurses on Monday, August 25, and one of the nurses tested positive for MERS.

The nurses’ supervisor relayed the news to one of the nurses, who in turn informed the Department of Health (DOH) early morning Tuesday, September 2.

The nurse who tested positive, a 37-year-old Filipina from General Santos City, was located Tuesday in South Cotabato and was already admitted at the Southern Philippines Medical Center.

Her specimen was sent to the Research Institute for Tropical Medicine (RITM) for further testing and confirmation. Results of the test are expected late Wednesday.

Before going back to the province, she first stayed with the other nurse’s family from August 29 to August 30.

The other nurse – a 49-year-old Filipina from Bulacan – upon learning the medical results of her co-worker, sought medical assistance at the Lung Center of the Philippines along with her family.

They were immediately tested, and results that came out Wednesday morning were all negative.

“As of today, despite the fact that dalawa na itong nakalusot na nurses (two nurses were able to enter the country), now we can still claim that the Philippines is MERS-CoV free,” Ona said.

As of July 23, the World Health Organization (WHO) reported 837 laboratory-confirmed cases of infections, 291 of which resulted in death, worldwide.

Health Spokesperson Lyndon Lee Suy said the nurse from General Santos City is still asymptomatic when she was admitted to the hospital.

Since both nurses were asymptomatic when they arrived in the country, they were not detected in the airport for further monitoring.

DOH is already tracking down 249 passengers of Saudi Airlines flight SV870, and 143 passengers of Cebu Pacific flight SJ997 – the August 31 flight of the nurse who went back to General Santos City. (READ: DOH sends experts to Middle East to check OFWs’ MERS status) 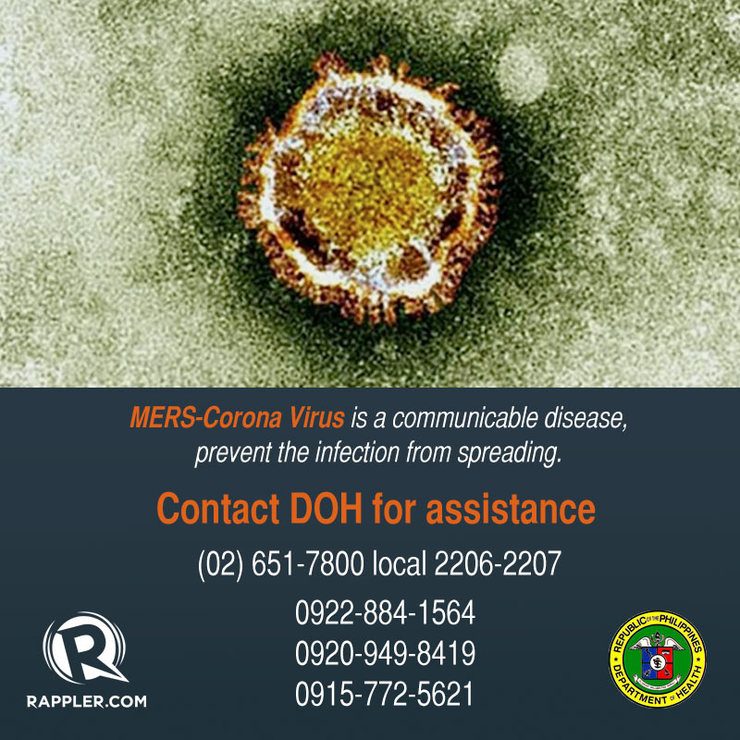 The Philippines reported its first laboratory-confirmed case of the MERS Coronavirus last April, when an OFW who tested positive in United Arab Emirates (UAE) came back home from Abu Dhabi.

More than 400 of the OFW’s co-passengers in an Etihad Airways flight were also tracked and tested by DOH. After retesting, the OFW eventually tested negative. (READ: Ona on MERS: Nat’l ID system needed to track victims faster)

Ona on Wednesday said they activated the inter-agency task force that will manage the infectious disease and help track the nurses’ co-passengers.

There is still no travel restriction to and from Middle East countries. Travelers are, however, advised to avoid contact with persons showing flu symptoms, and to observe frequent hand washing.

If they fall ill within 14 days upon arrival, they must report to any hospital and delay going to crowded places “until symptoms disappear.” Hospitals have been instructed by the department to report any patient who may be suspected to have the infection. – Rappler.com