‘Butchoy’ could hit before the weekend 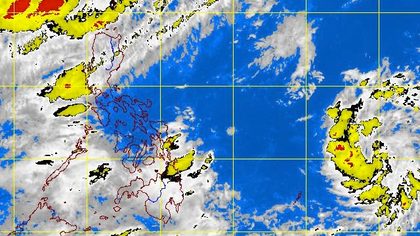 MANILA, Philippines (UPDATED) – As a shallow low pressure area and the Southwest Monsoon continue to dump rain over parts of the country, a tropical storm is coming near the Philippine Area of Responsibility (PAR), threatening to strike before the weekend.

In its latest weather advisory, state weather bureau PAGASA said Tropical Storm Guchol was spotted 1,370 kilometers east of Mindanao, and is expected to enter the PAR by Thursday or Friday.

Tropical Storm Guchol has maximum sustained winds of 65 km per hour near the center and gustiness of up to 80 kph. It is moving towards the west at 15 kph, and once it enters the PAR, it will be given the Philippine codename “Butchoy.”

Meanwhile, the shallow low pressure area was estimated to be located 210 km east of northern Mindanao, bringing scattered to widespread rains over the area and causing more flashfloods.

Several barangays in Malaybalay City and the municipality of Lantapan, both in Bukidnon, reported flash floods on Tuesday, June 12, due to the overflowing of flood waters from Bugkaon River.

Around 50 families were evacuated in Malaybalay City, while a bridge at Lantapan was slightly damaged, the National Disaster Risk Reduction Management Council (NDRRMC) said Wednesday.

Rain over western sections of Luzon, meanwhile, are caused by the southwest monsoon.

The bureau is warning residents in low-lying areas and mountain slopes to be on alert for possible landslides and flashfloods.

The wooden-hulled M/V Josille 2 was carrying 34 passengers and 12 crew members when it was reported before dawn to have sunk off the northern coast of Palawan, the coast guard said.

Two males and 2 females were recovered from the sea near the site of the sinking on Wednesday afternoon, said Commodore Alexander Lopez of the Joint Task Force Malampaya, based in El Nido.

So far, 16 survivors have been brought to Barangay Liminangcong in Taytay, where the vessel originated, and search and rescue operations are still ongoing.

The wooden ferry boat traversing the open sea from Taytay to El Nido in northern Palawan around 11 pm Tuesday evening.

Navy and Coast Guard vessels were reported having difficulty approaching the shallow waters where the vessel reportedly sank near Tent Island. – Rappler.com