SC: Up to Aquino to broker Tubbataha compensation with US 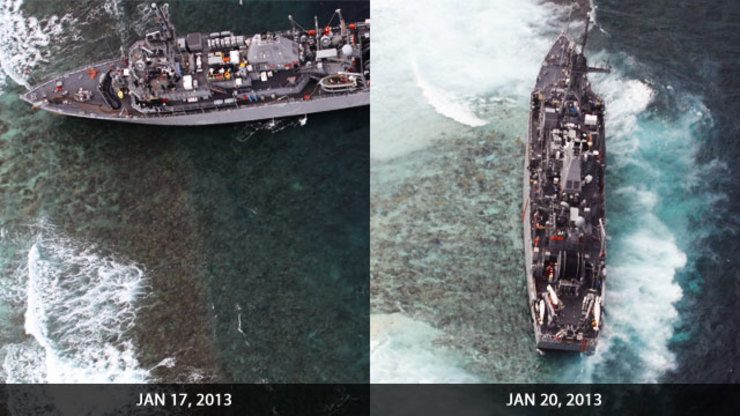 Facebook Twitter Copy URL
Copied
The High Court does not imply, however, that the President should bring the matter to the United Nations for arbitration

MANILA, Philippines – Unless President Benigno Aquino III seeks damages from the United States (US) over the destruction caused by its military vessel to parts of a protected marine reserve, an apology is all the Philippines will ever get.

This, after the Supreme Court (SC) deferred to Aquino the matter of seeking compensation for damages over a United States (US) Navy ship that run aground in the Tubbataha Reef in January 2013.

In its en banc session Tuesday, September 16, the SC junked a petition for a writ of kalikasan (nature) on the matter. The decision was penned by Associate Justice Martin Villarama Jr.

A writ of kalikasan is a court order sought as a legal remedy under the Philippine justice system. It enables protection against and response to critical environmental damage that threatens life, health, or property of inhabitants in two or more cities or provinces.

The SC said damages provided by the writ “are to be made in a separate civil suit” or “with any criminal action,” which it likewise refused to order, saying it has no jurisdiction over the matter.

Voting 13-0-2, the High Court denied a plea seeking for a court directive to file civil, administrative, and criminal suits for acts committed by US Navy officers during the grounding incident.

Aquino may, however, seek damages from the US through diplomatic means. This, the SC said, is no longer “subject to judicial inquiry or decision.”

“On the matter of the compensation and rehabilitation measures through diplomatic channels, the Court deferred to the Executive Branch noting that the conduct of foreign relations of the government is committed by the Constitution to the political departments of the government,” a media brief from the SC Public Information Office read.

On the heels of the US Navy mishap, the Philippine government declared it will be seeking damages over the incident.

The Tubbataha Reef Natural Park is a protected marine reserve and a World Heritage site located in Palawan province.

It was an Avenger-class mine countermeasures ship called the USS Guardian that ran aground near the Tubbataha Reef on January 17, 2013, a statement from the US Pacific Fleet revealed at the time.

No jurisdiction over case

The question of which entity has jurisdiction over the case was likewise discussed by the SC magistrates.

During deliberations, the justices agreed with Senior Associate Justice Antonio Carpio that “the the matter [is] within the ambit of Article 31 of the United Nations Convention on the Law of the Sea (UNCLOS).”

The UNCLOS is an international agreement that deals with issues relating to the law of the sea.

Provisions of the UNCLOS under Article 31 that impose liability for damages caused by warships or other foreign vessels that operated for non-commercial purposes and flouted laws and regulations of a state having jurisdiction over the coastal territory is “beyond dispute,” the SC said.

But the SC said it expects the US “to bear international responsibility” as outlined under the UNCLOS.

Asked whether the SC decision meant the President may bring the matter for UN arbitration if diplomacy fails, SC spokesman Theodore Te said there is “no such implication.”

While the SC found the petitioners to have legal standing to sue, it ruled that the suit against 3 US Navy officers was in effect a suit against the US. The Navy officers were sued in their official capacity, having controlled and supervised the USS Guardian.

The SC ruled that it cannot excercise jurisdiction over the case, given a legal principle that immunes states from suit.

“The Court ruled that the principle of State Immunity from suit bars the exercise of jurisdiction by this Court over the persons of (Scott) Swift, (Mark) Rice and (Terry) Robling, all of whom are officers of the US Navy,” Te explained.

The SC likewise ruled that the military pact known as the Visiting Forces Agremeent (VFA) between the US and the Philippines is not tantamount to a waiver of the said immunity, contrary to petitioners’ claim.

Given this, the SC denied petitioners’ plea to review the VFA and nullify certain portions of the agreement.

Non-ratification not an issue

Te said the SC justices extensively discussed the implications of US’ non-ratification of the UNCLOS, which they later on agreed as having little bearing on the January 2013 mishap.

The justices agreed with Carpio’s point that the US’ refusal to join the UNCLOS was based on its contention against provisions upholding mankind’s common ownership of the seabed and oceans.

“Thus, the US’ non-membership in the UNCLOS does not mean that the US will disregard the rights of the Philippines as a coastal state over its internal waters and territorial sea,” Te said. – Rappler.com