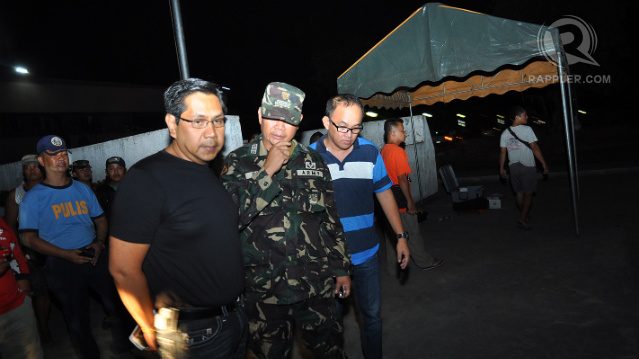 Facebook Twitter Copy URL
Copied
It looks connected to the peace 'spoilers' Bangsamoro Islamic Freedom Fighters based on the signature of the improvised explosive device, says a military official

“Based on the signature of the improvised explosive device (IED), it looks connected to the spoilers BIFF. This is the group of Basit Usman, who is also known for extortion activities,” said Major General Eduardo Año, commander of the 10th Infantry Division of the Eastern Mindanao Command.

But Año is not discounting extortion as the motive behind the attack and that Usman may be delivering a “fair warning” to their victims.

He said the attack was not meant to inflict maximum damage. The bomb was placed in the monument of national hero Jose Rizal, which is populated at day time but not at night, and exploded before 8  pm on Tuesday.

Año said it should be treated as “isolated incident” because no similar incidents have been reported in General Santos for a long time.

He also said that the incident does mean that the BIFF now has a presence in General Santos, as the city is supposedly only a transit area.

But Deles is not worried. She noted that the military has taken several BIFF camps and the residents in the communities are supportive of the peace process.

Deles said the new peace agreement has learned the lessons of the “failed” ARMM. The separation of powers of between the central government and the new Bangsamoro entity in terms of fiscal autonomy, justice, and other issues are better defined, she said. – Rappler.com