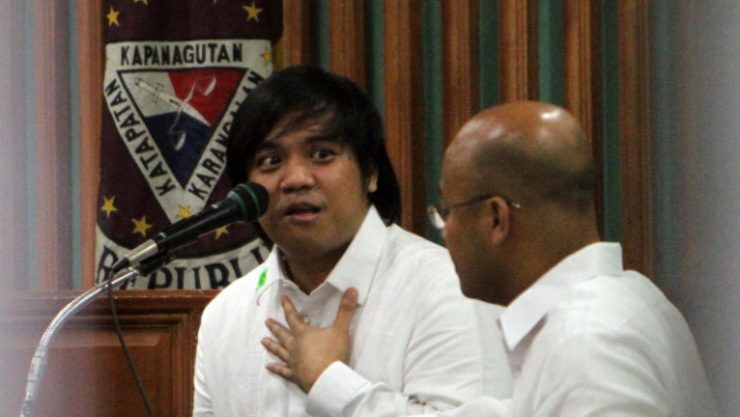 Facebook Twitter Copy URL
Copied
In court prior to the suspension, prosecution and defense lawyers quibble on who is causing delays in the bail hearing of Senator Jinggoy Estrada

“Of course, there’s no other thing for us to think than to think that this is one of the delaying tactics ng mga prosecution,” Estrada’s laywer Alexis Abastillas-Suarez said in an interview after the suspended Tuesday bail hearing of her client.

Prosecutor Janina Hidalgo said in court that the whistleblower was experiencing “headache, nausea, and cough.”

Based on a quick medical check-up ordered by the court, Luy’s blood pressure was considered high at 150/110. He was given a tablet of Catapres, used to treat hypertension, for his temporary relief.

The prosecution initially considered Luy’s transfer to a nearby hospital but dropped the idea when Luy’s blood pressure went down later in the afternoon.

Estrada’s camp was disappointed with Luy’s medical woes, given the almost 3-hour wait by the defense lawyers.

(We waited for so long in court for our turn in the hearing. When we came there, the witness was not ready. Of course, it was such a waste. The day was a waste for us.)

The Sandiganbayan Fifth Division was hearing Estrada’s plea to be allowed to post bail in his plunder case over the alleged diversion of his Priority Development Assistance Fund (PDAF) or pork barrel to ghost projects of non-government organizations associated with alleged mastermind Janet Lim-Napoles.

Estrada and Napoles remain in detention until the court grants their bail plea.

In court prior to the hearing’s suspension, prosecution and defense lawyers quibbled yet again on who was causing delays in the bail hearing.

Estrada’s lead counsel Jose Flaminiano complained to the court, claiming that the prosecution was not mindful of the summary nature of a bail hearing.

Flaminiano said Luy’s testimony in previous sessions was delving into matters not needed to prove a “strong evidence of guilt,” the standard needed to deny the bail plea of an accused.

But prosecutor John Turalba countered by saying it was the defense team causing delays with constant objections. “Almost half of the proceeding was consumed by the accused because of so many objections,” Toralba told the bench.

Justice Undersecretary Jose “JJ” Justiniano pointed out that Estrada’s lawyer Sabino Acut Jr even had issues with questions not involving his client but his co-accused Napoles.

Napoles’ lawyers should be the ones objecting to these questions, Justiniano added.

Acut defended himself by saying the prosecution should instead ask questions that are not objectionable in the first place.

Visibly irked, Justiniano pointed out, “In the interest of accuracy, 80% of the objections were overruled by the honorable court.”

Justice Roland Jurado, chairman of the 5th division, cut short the ongoing exchange and pointed out to the lawyers the time being wasted over their blame game.

“Let us forget that. We have already wasted how many minutes here,” he said.

Jurado gave this advice to the litigators: “We are all lawyers here. Just remember the lawyers’ code… Be honest to yourself.”

While he admitted that “we cannot teach them (the prosecution) what they will do in the case,” he reminded the parties to follow the rule on bail hearings.

“This is a bail hearing. Let’s follow the rule. Avoid delaying tactics,” he said. – Rappler.com